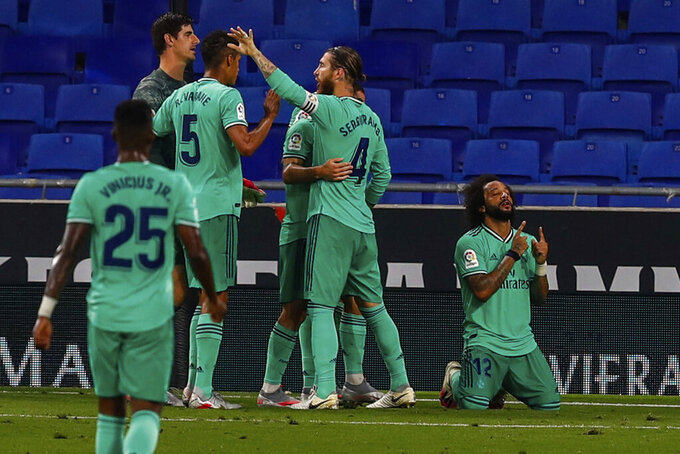 Liverpool plays its first game as Premier League champion away at the side it dethroned — Manchester City. Pep Guardiola's side is well placed to finish runner-up, sitting eight points ahead of Leicester, so the priority is winning the FA Cup and Champions League. Tottenham, which lost last season's Champions League final, is struggling to qualify for next year's edition. Jose Mourinho's side is at Sheffield United in Thursday's other game, sitting seven points behind fifth-place Manchester United.

Riding a five-match winning streak after the pandemic break, Real Madrid hosts Getafe looking to open a four-point lead over second-place Barcelona in the Spanish league. The Catalan club stumbled again earlier this week when it was held by Atlético Madrid to a 2-2 draw at home. Sxith-place Getafe can move within two points of the final qualification spot for the Champions League if it pulls off a victory against its Madrid neighbor. Eibar tries to move further from the relegation zone when it hosts midtable Osasuna, while struggling Real Sociedad tries to keep alive its hopes of qualifying for a European competition when it hosts last-place Espanyol.

Two of the in-form teams in Serie A meet when Atalanta hosts Napoli. Atalanta is pushing Inter Milan hard for third place and will be looking to cut the gap back to four points with a seventh successive Serie A win. But Napoli has won two straight in the league since beating Juventus for the Italian Cup title as it continues its resurgence under coach Gennaro Gattuso. It also won its three matches before soccer was halted because of the coronavirus pandemic. A win would see Napoli move level on points with fifth-place Roma if the capital side loses at home to relegation-threatened Udinese.

Werder Bremen faces a fresh fight to stay in the Bundesliga as it hosts second-division Heidenheim in the first leg of their promotion-relegation playoff. Werder avoided automatic relegation Saturday by beating Cologne 6-1 on the final day to overtake Fortuna Düsseldorf, which dropped into the second tier. Werder has been in the top division since 1981. Heidenheim comes from a small city in southern Germany and has never played in the top flight. The second leg is Monday.