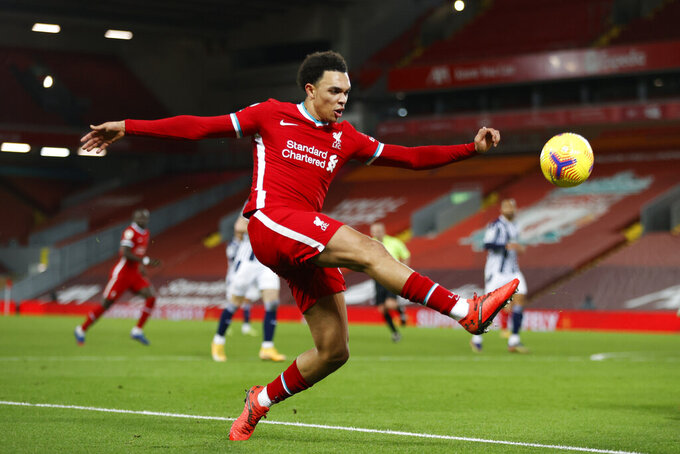 Liverpool travels to Newcastle atop the Premier League by three points. But the champions dropped points for only second time in 2020 at home on Sunday in a draw against West Bromwich Albion. Liverpool was hoping to turn to Thiago Alcantara, the creative midfielder signed from Bayern Munich in September who has been sidelined by a knee injury. Thiago has returned to team training but is not ready to play. While Thiago is edging closer to a comeback, Klopp has lost another two players to injury, with center back Joel Matip sustaining a groin injury against West Brom and midfielder Naby Keita missing that game with another muscle problem. Newcastle is without a win in its past four games and Allan Saint-Maximin and captain Jamaal Lascelles are still out after suffering long-term effects of the coronavirus. Tottenham is also due to host Fulham, although coronavirus cases at its London rival have created doubts about the game going ahead.

Atlético Madrid hosts crosstown rival Getafe without England defender Kieran Trippier, who will miss the match due to his 10-week suspension for breaking betting rules. Sime Vrsaljko will likely take his place at right back after returning from a long injury layoff. Atlético will also be without striker Diego Costa, who rescinded his contact with the club. Diego Simeone’s side has won nine in a row over Getafe at home by a combined goal margin of 23-0. Atlético will need to win to ensure it stays atop the Spanish league. Real Madrid is only behind Atlético on overall goal difference before it visits Elche. Zinedine Zidane has said he expects to give minutes to Eden Hazard, who hasn’t played in a month due to injury. Elche has impressed since being promoted with only four losses in 13 games. Valencia also visits Granada seeking to end a seven-round winless streak, while Celta Vigo hosts Huesca.