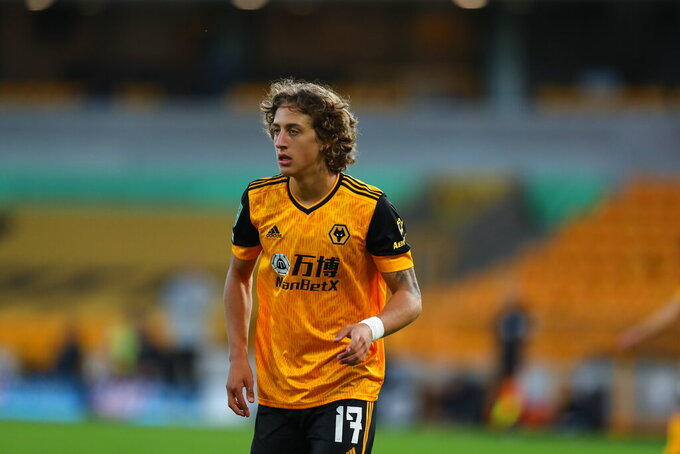 Manchester City begins its quest to regain the Premier League trophy from Liverpool when it plays Wolverhampton Wanderers on Monday. City has made two key new signings in center back Nathan Ake and winger Ferran Torres.

But City's record goalscorer, Sergio Aguero, faces another two months out after knee surgery in June. Playmaker Riyad Mahrez and center back Aymeric Laporte are short of fitness after contracting the coronavirus.

City was given an extra week’s rest after reaching the Champions League quarterfinals in August. Wolves beat City home and away last season.

Defender Jonny is sidelined with a knee injury that will keep him out until next year. Defensive signing Ki-Jana Hoever is not eligible to make his debut after joining from Liverpool on Friday as part of the deal that saw Diogo Jota head in the opposition direction to the champions.

Wolves opened with a 2-0 win over Sheffield United, which also plays Monday against Aston Villa. There could be Villa debuts for goalkeeper Emiliano Martinez, defender Matty Cash and forward Ollie Watkins — a trio that cost more than 60 million pounds ($78 million).

There is finally a sense of optimism at AC Milan and its first match against Bologna will show if that is justified. Milan was one of the in-form teams when Serie A resumed during the coronavirus pandemic and fans will be eager to see if that continues into the new season.

Milan’s remarkable upturn in results saw the Rossoneri win nine of their 12 matches after the restart, drawing the other three. Young midfielder Sandro Tonali should make his league debut for Milan after joining from Brescia. Zlatan Ibrahimović has signed for another season.