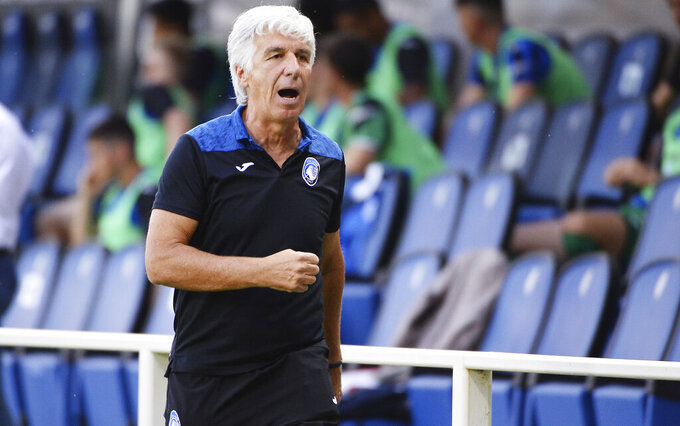 Atalanta coach Gian Piero Gasperini leaves the field after receiving the red card during the Italian Serie A soccer match between Atalanta and Bologna, at the Gewiss Stadium in Bergamo, Italy, Tuesday, July 21, 2020. (Giuseppe Zanardelli/LaPresse via AP)

A look at what’s happening around European soccer on Friday:

In the first competitive match since the coronavirus pandemic stopped play in France, French league champion Paris Saint-Germain takes on Saint-Etienne in the French Cup final with a domestic double in sight. The final will take place at the 80,000-capacity Stade de France in front of a vastly reduced crowd, and without Saint-Etienne fans. Because of the French government's measures limiting attendance to 5,000 people as part of the health protocol, Saint-Etienne supporters have decided to boycott the game in protest. PSG secured its seventh league title in the last eight years after the government ruled that the league had to be canceled because of the pandemic. If it beats Saint-Etienne, PSG will have the chance to secure a treble against Lyon in the League Cup final. The Parisian club also has made it to the last eight of the Champions League.

Atalanta needs at least a point at AC Milan to avoid mathematically being out of the title race. Atalanta is six points behind Juventus, with three rounds remaining, and the Bianconeri hold the tiebreaker over the Bergamo squad courtesy of a better head-to-head record. Along with Atalanta, AC Milan has been the form team since the return of Serie A. The Rossoneri have picked up 20 points from their eight league matches since the restart, including wins over Juventus, Lazio and Roma.