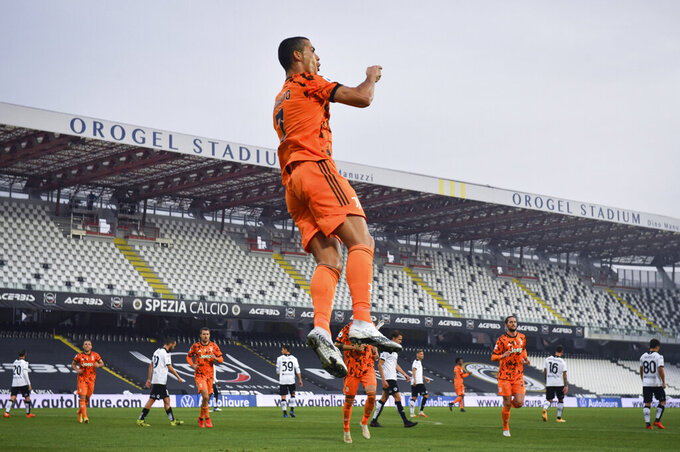 Juventus' Cristiano Ronaldo celebrates after scoring his side's fourth goal, during the Serie A soccer match between Spezia and Juventus, at the Dino Manuzzi Stadium in Cesena, Italy, Sunday, Nov. 1, 2020. (Massimo Paolone/LaPresse via AP)

A look at what’s happening around the Champions League on Wednesday:

Chelsea goalkeeper Edouard Mendy faces a quick reunion with former team Rennes, having made a huge impression since switching clubs in September. Since leaving Rennes in a deal worth $28 million, the Senegal international has played five games for Chelsea in all competitions and has yet to concede a goal. While his shot-stopping has been imperious, the calmness Mendy has brought to Chelsea's previously shaky defense has been telling and he is proving a huge upgrade on the error-prone goalkeeper he has replaced, Kepa Arrizabalaga. Chelsea has opened group play with a 0-0 draw against Sevilla and a 4-0 win at Krasnodar. As expected, Chelsea and Sevilla are leading the way, with both teams on four points, and already Rennes and Krasnodar — two group-stage debutants on one point apiece — appear to be battling for a third-place finish to drop into the Europa League. Sevilla is at home for the first match of its double-header against Krasnodar.

An underperforming favorite tackles an in-form underdog as Borussia Dortmund heads to Club Brugge. Dortmund started its Champions League campaign with a 3-1 loss to Lazio but has since won three games in all competitions without conceding a goal — important for a team which has struggled to string together reliable performances in defense. Brugge is riding high after a win over Zenit St. Petersburg and a draw with Lazio. Another good showing against Dortmund could allow the Belgian club to dream of getting out of a Champions League group for the first time. Zenit is looking for its first point in group play in a home match with Lazio, which is without European Golden Shoe winner Ciro Immobile, starting goalkeeper Thomas Strakosha and midfielder Lucas Leiva who did not pass UEFA's coronavirus screening despite protests from the Roman club.

Group leader Barcelona hosts a Dynamo Kyiv squad depleted by COVID-19 cases. The Ukrainian club said nine players tested positive for the coronavirus ahead of the team's trip to Spain. It also won't count on captain Serhiy Sydorchuk because of a suspension. Lionel Messi's squad won its first two Champions League games but remains under pressure after a poor campaign in the Spanish league. The draw at Alavés on Saturday was the Catalan club's fourth setback in six league matches. It won only twice, with two draws and two losses, including to Real Madrid. Cristiano Ronaldo returns for a visit to Ferencvaros after missing Juventus' opening two games with the coronavirus.

Paris Saint-Germain and Leipzig meet again, a little over two months after PSG won their 2019-20 Champions League semifinal match in Lisbon. This time they're competing for a spot in the knockout stage and both have lost to Manchester United while also picking up wins over Istanbul Basaksehir. PSG is without its two star forwards, Neymar and Kylian Mbappé, as well as striker Mauro Icardi and midfielders Marco Verratti and Julian Draxler. Reeling from a 5-0 defeat at United last week, Leipzig then lost 1-0 at Borussia Mönchengladbach in the Bundesliga on Saturday. The Champions League is proving a welcome distraction for United, which has earned just seven points from its first six games in the Premier League but is flying in Europe and could yet qualify with two group games to spare with back-to-back wins over Basaksehir. The first match of the double-header is in Turkey.