MATCHDAY: Spain-Netherlands highlight of round of friendlies 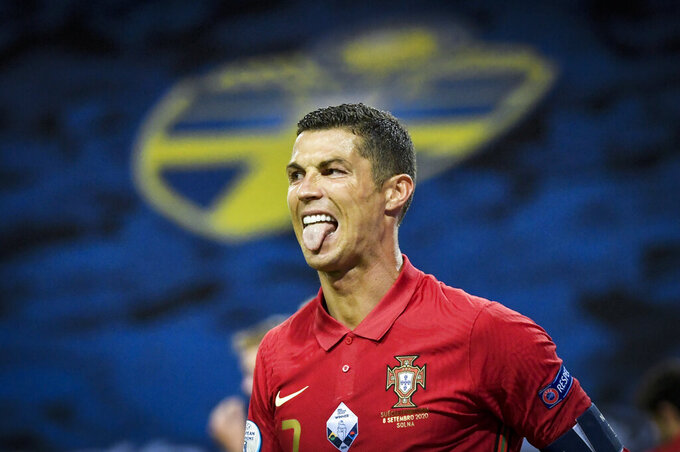 FILE - In this Sept. 8, 2020 file photo, Portugal's Cristiano Ronaldo sticks out his tongue during the Portugal against Sweden UEFA Nations League soccer match at Friends Arena in Stockholm, Sweden. The Portuguese soccer federation says on Tuesday, Oct. 13 Cristiano Ronaldo has tested positive for the coronavirus. The federation says Ronaldo is doing well and has no symptoms. He has been dropped from the country's Nations League match against Sweden on Wednesday. (Janerik Henriksson/TT via AP, file)

Former Barcelona teammates Luis Enrique and Frank de Boer will meet as coaches when the Netherlands hosts Spain. They played more than 120 matches together at the Catalan club from 1999-2003. De Boer has taken over the Dutch national team as a replacement to Ronald Koeman, who left to take the Barcelona coaching job. Spain's attack will likely be led by Álvaro Morata, who has scored three goals in his last three matches with Juventus. La Roja is without forward Rodrigo after he tested positive for the coronavirus.

Germany is playing the Czech Republic, but it’s really battling apathy among its fans. Last month’s friendly against Turkey drew the lowest TV ratings for a prime time national team game this century and Germany is on a run of four draws in five games. Disputes over who to pick have led to what team director Oliver Bierhoff called “a dark cloud” over the team. Germany will field a weakened team against the Czechs. Leeds defender Robin Koch will start while several players sit out before returning for Nations League games against Ukraine and Spain. German fans are lukewarm about the Nations League too. Germany was meant to be relegated in the 2018-19 competition, but was reprieved when UEFA changed the group structure. The Czech team reported positive coronavirus tests for two players ahead of the game. Both players are in isolation.

After Eden Hazard was quarantined in Madrid because of a COVID-19 infection and several Belgian players were ruled out because of injuries, FIFA's top-ranked team finally received good news when Romelu Lukaku was given the green light to travel to Belgium. There were concerns the former Manchester United striker could be stuck in Italy at Inter Milan because of coronavirus travel restrictions. Lukaku recently came back from a leg injury and it's still unclear whether he will feature in the friendly match against Switzerland. Belgium will then face England and Denmark in the Nations League. There is also a glimmer of hope Hazard could join his teammates at a later stage as the Belgian federation said he just need a negative test to be allowed in the group. Switzerland will be without Nice defender Jordan Lotomba, who tested positive for COVID-19 alongside a medical staff member.

With several French players hampered with injuries, Monaco defender Ruben Aguilar is likely to get his first taste of international football at the Stade de France. The former Montpellier right-back was called up by French coach Didier Deschamps late Monday as a possible replacement for Benjamin Pavard. The Bayern Munich player and World Cup winner is among the French players who have joined the French base camp of Clairefontaine with slight physical problems alongside Kylian Mbappé and Presnel Kimpembe. France will use the game against Finland to get ready for a pair of Nations League matches at Portugal and against Sweden at home. The 27-year-old Aguilar had never been called before.

Italy is without coach Roberto Mancini and several players because of the coronavirus. Players from six clubs — Fiorentina, Genoa, Inter Milan, Lazio, Roma and Sassuolo — are self-isolating because of COVID-19 cases in their squads and will only join the rest of the Azzurri squad when allowed to do so by their local health authorities. That was why Mancini named an enlarged squad of 41 players. Mancini himself is currently self-isolating in his home in Rome after testing positive for the virus on Friday. After the friendly against Estonia, Italy then plays its final two UEFA Nations League group matches at home to Poland on Sunday and at Bosnia-Herzegovina three days later.

Cristiano Ronaldo continues his quest to reach the record of 109 national team goals held by former Iran striker Ali Daei. Ronaldo recently became only the second male soccer player to reach 100 goals for a national team. He stands at 101. He had been nursing a knee injury but Portugal coach Fernando Santos said he will be ready to play.