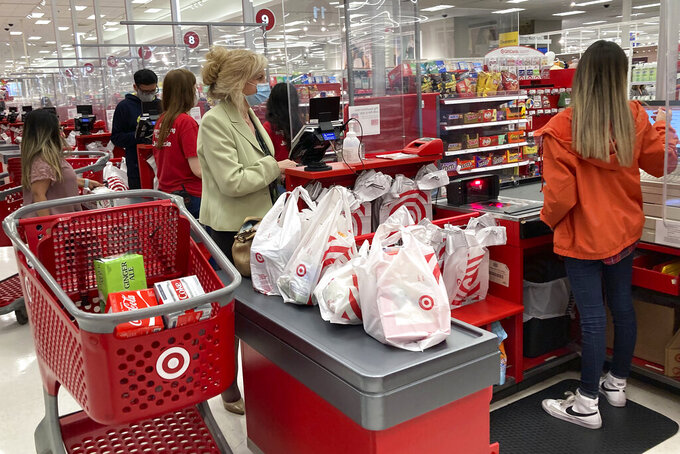 A customer wears a mask as she waits to get a receipt at a register in Target store in Vernon Hills, Ill., Sunday, May 23, 2021. Consumer spending was flat in May while incomes dropped for a second month as the impact of the government’s individual impact payments waned. (AP Photo/Nam Y. Huh)

WASHINGTON (AP) — Consumer spending was flat in May with incomes dropping for a second month as the impact of the government's pandemic stimulus payments waned. Inflation, however, posted a sizable gain with prices excluding food and energy jumping by the largest amount in nearly three decades.

The flat reading for consumer spending in May represented a marked slowdown following gains of 0.9% in April and a 5% surge in March, the Commerce Department reported Friday. The spending surge in March had been fueled by distribution of payments of up to $1,400 per individual from a $1.9 trillion stimulus bill, the Commerce Department reported Friday.

With those payments winding down, incomes fell by 2% in May after an even bigger drop of 13.1% in April. Wages and salaries, the key component of income, were up 0.8% in May, reflecting rising employment levels.

Inflation tied to a gauge of consumer spending that is closely watched by the Federal Reserve increased 0.4% in May and is up 3.9% over the past 12 months. That was the largest 12-month increase since 2008 and well above the Fed's 2% target for annual price increases.

Core inflation, which excludes volatile food and energy costs, rose 0.5% in May and is up 3.4% over the past 12 months, the biggest jump since 1991.

These sharp price gains have raised worries that runaway inflation could become a threat, something not seen in this country since the oil shocks of the 1970s.

Federal Reserve Chairman Jerome Powell, however, told Congress earlier this week that he still believes the current spike in inflation is transitory and being caused primarily by momentary problems in re-opening the economy such as supply-chain bottlenecks.

There were major changes in the composition of consumer spending in May with the purchase of goods, which had been driving the recovery, falling 1.3% while spending on services increased by 0.7%. Services spending has been held back because of the pandemic shutdowns of restaurants and the sharp declines in travel-related spending.

“Consumers have used their stimulus payments to buy big-ticket items like cars, appliances and building materials. Now that the economy is reopening, they are shifting their spending to services that they have not been able to enjoy during the pandemic like dining out and travel,” said Gus Faucher, chief economist at PNC Financial.

Consumer spending is closely watched since it accounts for more than two-thirds of economic activity. Even with the slowdown in the growth of spending seen in May, economists remain optimistic that consumers will power a strong rebound this year.

On Thursday, the government reported that the overall economy, as measured by the gross domestic product, grew at a solid 6.4% rate in the first three months of this year.

Many economists are looking for GDP to grow at a rate of 10% or better in the current April-June period. That forecast reflects a belief that consumers, sitting on large amounts of unspent cash, will keep boosting their spending as the economy continues to re-open.

Companies are beginning to benefit from the spending gains. Footwear and clothing company Nike reported late Thursday that it posted record fiscal fourth-quarter sales in North America, breaking the $12 billion quarterly sales mark for the first time in the company's 50-year history.

The personal savings rate stood at 12.4% in May, down slightly from 14.5% in April but still at a high level, indicating households have the resources to spend.