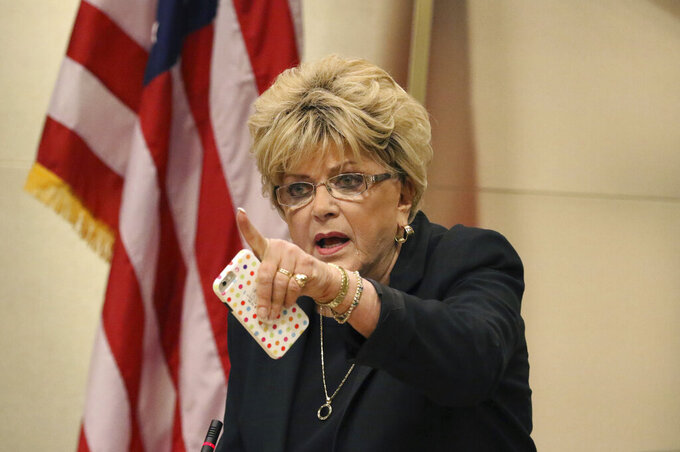 FILE - In this Nov. 6, 2019, file photo, Las Vegas Mayor Carolyn Goodman points toward protesters during the council meeting where the city council was considering a ban on homeless camping in Las Vegas. Nevada officials condemned comments Wednesday, April 22, 2020, by Goodman after she called for casinos and other nonessential businesses to reopen and suggested the city could serve as a test case to measure the impact during the coronavirus pandemic. One local official called her comments "reckless and dangerous." (Bizuayehu Tesfaye/Las Vegas Review-Journal via AP, File)

LAS VEGAS (AP) — Nevada officials condemned comments Wednesday by Las Vegas Mayor Carolyn Goodman after she called for casinos and other nonessential businesses to reopen and suggested the city could serve as a test case to measure the impact during the coronavirus pandemic. One local official called her comments “reckless and dangerous" and another described them as an “embarrassment.”

Goodman, during a 25-minute interview with Anderson Cooper on CNN, said she wants everything back open, including casinos, restaurants and small businesses, and a return of conventions.

The politically independent mayor suggested that “viruses for years have been here” and said that she had suggested that the residents of Las Vegas become “a control group” to see how relaxing closures and restrictions would affect the city.

“I offered to be a control group and I was told by our statistician you can't do that because people from all parts of southern Nevada come in to work in the city,” Goodman said. “We would love to be that placebo side so you have something to measure against."

Sisolak has repeatedly pushed back, saying that he understands the economic harm the order is causing but saving lives is more important.

The governor responded to Goodman in an in interview on CNN Wednesday evening, in which he noted the state reported more deaths from the virus in the hours since the mayor's television appearance.

“I will not allow the citizens of Nevada, our Nevadans, to be used as a control group, as a placebo, whatever she wants to call it," Sisolak said.

Goodman, 81, was elected in 2019 to serve a third and final term as mayor. She has no oversight of the casino-lined Las Vegas Strip because it is outside the city limits, though older downtown casinos near the Fremont Street district fall within its boundaries.

The mayor said Wednesday that while she wants casinos to reopen, she offered no guidance on how they could do so safely and maintain social distancing, saying, “That's up to them to figure out,” and “I am not a private owner.”

She demurred when asked if she herself would enter a reopened casino, saying she has a family and doesn't gamble and is very busy. She also dismissed a Chinese study cited by Cooper showing the spread of COVID-19 in a restaurant, saying, “This isn't China, this is Las Vegas, Nevada.”

Las Vegas City Councilman Brian Knudsen said Goodman “does not speak for all of us,” and reopening now “is reckless and completely contrary to the overwhelming consensus of medical experts.”

U.S. Rep. Dina Titus, a Democrat who represents the Las Vegas Strip, said Goodman doesn't represent the area “literally or figuratively" and the advice of scientists telling people to stay home should be heeded.

Justin Jones, a Democrat who sits on the Clark County Commission that oversees the Strip, called the mayor “an embarrassment." His commission colleague Michael Naft called the mayor’s remarks “reckless and dangerous” and said lifting restrictions too soon would be a slap in the face of those who sacrificed.

The casino workers' Culinary Union, which represents about 60,000 bartenders, cooks, housekeepers and other employees, said Goodman's remarks were “outrageous considering essential frontline workers have been dealing with the consequences of this crisis firsthand.”

“Workplaces need to be safe and healthy — not a petri dish,” Geoconda Argüello-Kline, the union’s secretary-treasurer, said.

The union said 11 of its members so far have died of COVID-19.

Statewide, 187 people have died of the disease and more than 4,000 have tested positive. Most people with the virus experience symptoms such as fever and cough that clear up in two to three weeks. Older adults and people with existing health problems can face severe illness, including pneumonia, and death.