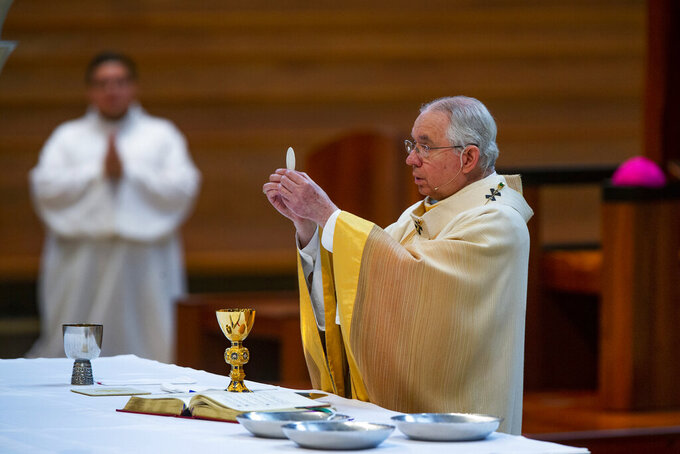 FILE - In this Sunday, June 7, 2020 file photo, Archbishop Jose H. Gomez celebrates the the Solemnity of the Most Holy Trinity Mass at the Cathedral of Our Lady of the Angels in downtown Los Angeles. Gomez is serving as the United States Conference of Catholic Bishops president since 2019. (AP Photo/Damian Dovarganes)

Meeting online rather than in person, America’s Catholic bishops worried Monday that the coronavirus pandemic is testing people’s faith and wrestled with how to respond to a Vatican report detailing the serial sexual misconduct of ex-Cardinal Theodore McCarrick.

“People’s faith in God has been shaken” by the pandemic, said Los Angeles Archbishop José Gomez, president of the U.S. Conference of Catholic Bishops. “In every diocese, we find people’s lives have been devastated.”

Gomez, in an address near the start of the two-day meeting, also acknowledged the impact of the McCarrick report issued last week after a two-year investigation. It found that over several decades, bishops, cardinals and popes dismissed or downplayed reports of McCarrick’s misconduct with young men as he rose through the ranks to become a cardinal and the archbishop of Washington, D.C.

“Remember all the victims of sex abuse,” Gomez said. “We want to express our deep sorrow and pray that they might find healing and hope.”

The bishops first discussed the McCarrick report privately and then in an open session that was livestreamed on the USCCB website. Gomez; conference vice president and Detroit Archbishop Allen Vigneron; and the USCCB's general secretary were the only people on the home screen, with other bishops raising their hands virtually from their far-flung dioceses to be called on to speak.

Several suggested specific steps to consider in response to the McCarrick report. Among them:

— Bishop Michael Olson of Fort Worth, Texas, said the conference should ascertain and publicize the details of monetary gifts that McCarrick — a prodigious fundraiser — made to individuals and organizations during his rise. Such details were not provided in the Vatican report.

— Bishop David Ricken of Green Bay, Wisconsin, depicted McCarrick as a manipulative sexual predator capable of “grooming” young people and luring them into dangerous situations. Ricken said the church should seek professional assistance in trying to identify people with such personalities before they gain positions of trust they can exploit.

— Bishop Mark Brennan of West Virginia's Wheeling-Charleston diocese, suggested the church change the way bishops are chosen, allowing for a comment period of 30 to 60 days before an announced appointment becomes final. This would allow for allegations of misconduct to be raised by people who weren't involved in the confidential vetting process, Brennan said.