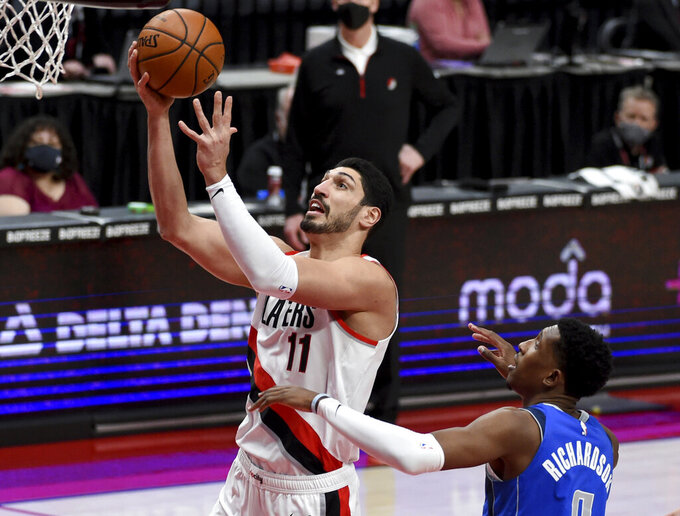 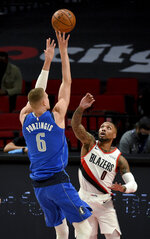 The All-Stars for each team, Lillard and Luka Doncic (38 points, nine rebounds, eight assists) both had big nights. But Lillard had much more help from his co-star, as Kristaps Porzingis finished with just 11 points and didn’t make a field goal until the early third quarter.

“That was my ninth time playing basketball since January 16th,” McCollum said after his best game since returning from a broken foot. “It’s hard to find a rhythm in a season like this. I was on a minutes restriction, I was rushing, I wasn’t playing with pace. I kind of settled in today. I got 23 shots up in 28 minutes.”

The teams meet again Sunday, when Dallas will look for more from Porzingis, its second-leading scorer.

“He got off to a slow start and we have just got to involve him a little bit more,” coach Rick Carlisle said.

With 4:25 left in the second quarter, Porzingis was called for a technical foul after arguing a call with the officials. Seconds later, Doncic was also assessed a technical foul. Lillard made both technical free throws and the Blazers led 64-60 at halftime.

“We made him have to work and have to make plays and I think that frustrated him,” Robert Covington said of Portland’s job against Porzingis. “He doesn’t like people to get up under him. For us, (Derrick Jones Jr.) and I did a great job of getting under him.”

“After my first two years in Atlanta, I didn’t think I’d get to 100 wins,” Stotts said.

Lillard collided with two Mavericks players with 2:37 left in the third quarter, staying on the ground and grabbing his left knee for a few minutes but staying in the game.

The Mavericks led by as many as eight in the fourth quarter before Rodney Hood’s 3-pointer cut the Mavericks’ lead to 110-109 with 4:26 left.

A dunk by Carmelo Anthony with 4:04 left wrestled the lead back for the Blazers. Lillard’s jumper with 3:23 remaining pushed Portland’s lead to 113-110 and he followed with a layup for a five-point lead.

Blazers: After back-to-back wins, including a 50-point game earlier this week, there’s growing buzz about Lillard as an MVP candidate. When the subject of comparing Lillard to past greats came up, Carlisle offered that Portland’s star is a first of his kind. “He’s a pioneer,” Carlisle said. “A lot of people will compare him to Steph Curry, I see him as being different. Lillard has really perfected the long 3-point shot off the dribble. It wasn’t that long ago where a pull up 3-point shot coming up the court was considered a cardinal sin in this league. He’s one of the guys who caused every team to work on this in skill development.”

Mavericks: The Mavs were without a player who has been key for them over the past few weeks as Willie Cauley-Stein missed the game due to the league’s health and safety protocols. Carlisle told reporters that Cauley-Stein had a possible exposure to the coronavirus and is currently in quarantine for an “unspecified” period of time.