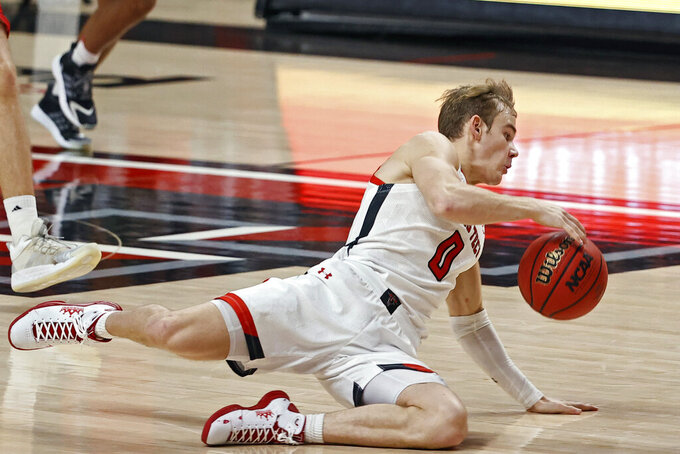 Texas Tech's Mac McClung (0) falls down while dribbling down the court during the first half of an NCAA college basketball game against Incarnate Word, Tuesday, Dec. 29, 2020, in Lubbock, Texas. (AP Photo/Brad Tollefson)

It wasn't because coach Chris Beard didn't think he deserved it.

“I thought he was playing as well as any young player in college basketball last year the last month of the season,” Beard said of McCullar's pandemic-shortened 2019-20 campaign. “I have very, very high expectations for Kev, and I thought tonight was a great first step.”

McCullar scored 11 points after waiting nine games to get his season going and the No. 13 Red Raiders cruised in a tune-up before Big 12 play resumes, beating Incarnate Word 79-51 on Tuesday night.

Marcus Santos-Silva also had 11 points for the Red Raiders (8-2), who got a brief holiday break after a two-point win at Oklahoma and are gearing up for back-to-back conference games at home.

The Cardinals were playing for the first time in 24 days after four games were called off because of COVID-19 issues. They didn't get to resume practice until Saturday because of quarantines.

“It's tough whether you have a layoff or no layoff,” Incarnate Word coach Carson Cunningham said. “We just don't want to make excuses. We just way to try to get better every day and deal with the hand that's dealt. I hope we helped Texas Tech get better as it prepares for conference.”

McCullar, who became a solid role player during the pandemic-shortened 2019-20 season, got a strong ovation when he came off the bench early in the game. He was 5 of 9 from the field while playing 12 minutes, getting an assist on a layup from Santos-Silva immediately after coming in.

“It was a big game for me,” said McCullar, whose first points came on a three-point play. “It was an emotional game to finally be back out there. Just been grinding. Thank the coaching staff for keeping me positive.”

Kyler Edwards had 10 points and eight rebounds, going 2 of 4 from 3-point range. Texas Tech shot 30% from long range (6 of 20) after finishing below that mark in the previous four games.

Mac McClung scored eight points with seven rebounds and three assists in 23 minutes, the most playing time for any Texas Tech player as coach Chris Beard used a 13-man rotation.

Incarnate Word: The Cardinals were 5 of 21 from the field in the first half after going 3 of 30 in the second half of an 87-37 loss at Texas Tech in their season opener two years ago. That's 8 of 51 over two halves as Incarnate Word, which managed to get to 50 points by making 10 of 21 shots in the second half.

Texas Tech: All 10 Texas Tech players who got into the game in the first half scored, led by McCullar with nine points. They had 11 assists on 17 baskets, led by McClung with three as the Red Raiders built a 41-19 lead.

Texas Tech had 17 assists on 29 baskets while holding Incarnate Word to two assists, none in the first half. The Red Raiders also forced 20 turnovers while committing seven, outscoring the Cardinals 26-2 off turnovers.

“I thought we were dialed in tonight defensively,” Beard said. “We’re still just making too many mistakes. We’re doing enough good things to be a defense that you can win with. It’s eliminating mistakes. We’re still striving for that consistency.”

Incarnate Word: A New Year's doubleheader of sorts against McMurry at home on New Year's Eve and New Year's Day. Those are the final nonconference games before the Southland Conference opener at Northwestern State on Jan. 6.

Texas Tech: The Red Raiders return to Big 12 play at home against Oklahoma State on Saturday. The only other scheduled nonconference game at the moment is Jan. 30 against LSU.