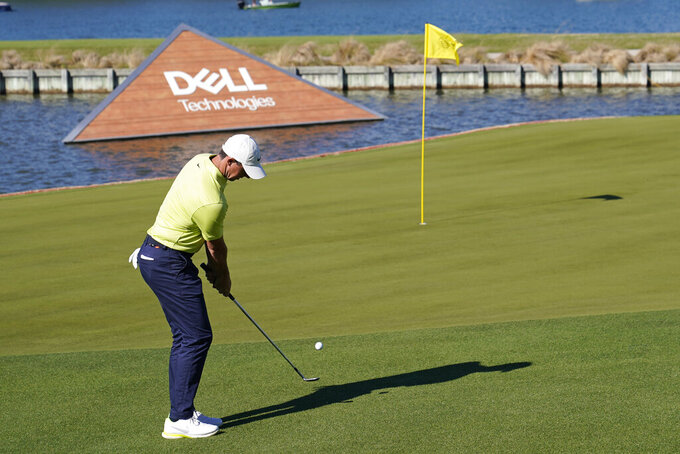 AUSTIN, Texas (AP) — Rory McIlroy is turning to noted English swing coach Pete Cowen to shore up issues at the top of his swing without any kind of an overhaul, and he hopes to pick up other “little nuggets” that can only help.

McIlroy spoke for the first time Thursday about his decision to bring Cowen into his stable, adding that longtime coach Michael Bannon will still be involved.

One reason for the change is travel. McIlroy said he hasn't been able to see his coach from Northern Ireland as frequently since the COVID-19 pandemic and continuity has been lacking.

“Every time we saw each other it was almost like we were trying to do too much,” McIlroy said. “Where I think Pete is out on tour enough to sort of give me maybe feels that I can play with and then stuff that I can work on the range.

“As everyone knows, it’s so hard to go out on the golf course and think so much about your golf swing,” he said. “You need to be able to let that go and just be able to play shots. But if you have a couple little feels in there, it can help, and that’s sort of the reason that I’ve went down this road.”

McIlroy has not won since the HSBC Champions in Shanghai in the fall of 2019, though he was playing as well as anyone up until the pandemic shut down golf. Since the return in June, he has had only six top 10s in 20 starts worldwide as his world ranking has gone from No. 1 to No. 11.

The Dell Technologies Match Play is his final event before he goes to the Masters with another shot at completing the career Grand Slam. McIlroy stayed alive at Austin Country Club with a 4-and-3 win over Lanto Griffin. He would need to win Friday and have Griffin beat Ian Poulter for any chance of advancing to the weekend.

But this is more about the long haul.

McIlroy emphasized that he is not starting anything new with Cowen, whom he has known since he was 13.

“He’s seen me grow up swinging the golf club,” McIlroy said. “With what I’m struggling with in my swing at the minute, I think his coaching philosophy puts an emphasis on that in terms of getting structure in the right arm and getting that supported at the top, and I just felt like he maybe had some ideas and had maybe a little more knowledge on that part of the golf swing than what I currently had.”

McIlroy said Cowen also is renowned for his work on the short game.

“I think just picking up those little nuggets from him is only going to help in the long run,” he said.

McIlroy said the relationship and the agreement he has with Bannon is “still the same.”

McIlroy dug himself a hole at the Match Play with a 6-and-5 loss to Poulter in the opening round, his worst loss in this event in 10 years. He went through 11 bags of balls on the practice range after his loss.