McManus driven by Fangio's refusal to let him go for record 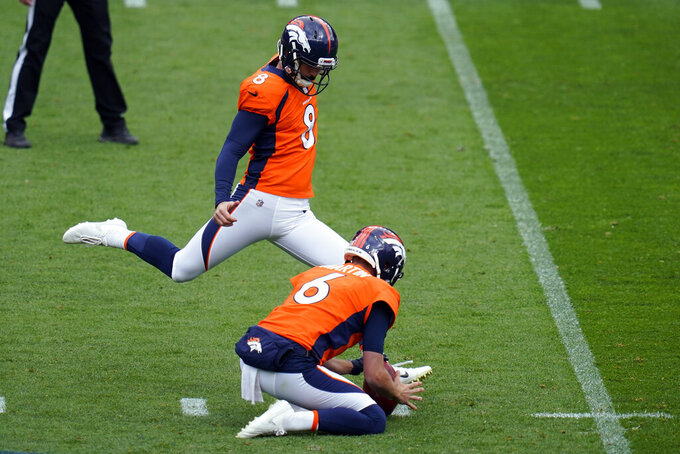 ENGLEWOOD, Colo. (AP) — On a cold afternoon last December, a furious Brandon McManus ripped his helmet off and flung it to the ground after Vic Fangio summoned him back to the sideline just as he was about to attempt a record 65-yard field goal.

When he came back from halftime, McManus lined up at the exact spot and sent the practice kick sailing through the uprights in the north end zone, a not-so-subtle dig at Fangio for denying him a chance to best Matt Prater's record 64-yarder, which came on the same field six years earlier.

Fangio’s reasoning for doing so was twofold: 1 second left before halftime wasn’t exactly desperation time and, more importantly, he said over the years he had seen kickers mess up their mechanics on extra long attempts.

“Does a Hail Mary change the way a quarterback throws the ball?” retorted McManus after his 53-yarder as time expired gave Denver a 23-20 win over the Chargers that day.

Fangio’s fold continues to fuel McManus, who has connected on 15 of 17 field goals since, including two-game winners from 53 yards out.

His three field goals last week against the Jets included a pair longer than 50 yards and earned him special teams top-player honors in the AFC for the first time in his seven-year NFL career.

“There’s a lot of positive things that come out of playing angry and mad,” McManus said.

One of them is riches.

McManus signed a four-year, $17.2 million extension on the eve of the season, and so far he’s made six of seven attempts with his only miss a 58-yarder.

His only miss in 10 attempts last season after Fangio denied him a chance to beat Prater’s mark was from 57 yards. But that came on a day he accounted for 10 points in Denver’s 16-15 win over the Raiders in the 2019 finale.

“I wanted to attempt that kick, as we all know, and I have to continue to make everything underneath that to make sure that he gives me that opportunity,” McManus said.

His 53-yarder with 3:08 remaining gave the Broncos a 30-28 lead they wouldn’t relinquish. It also gave him his fifth career game with multiple 50-yard field goals, one shy of Justin Tucker’s record six.

It also marked the second time in his career he’s connected on multiple 50-yarders in the fourth quarter. The only other kickers ever to do that are Martin Gramatica (three) and Stephen Gostkowski (two).

“Every time I step on the field, I have the utmost confidence in myself to make the kick," McManus said. "Sometimes it doesn’t go that way, sometimes it does. This season so far, especially on the longer ones, I’ve been trying to do better at staying more relaxed out there, rather than be excited to kick them and getting too fast.”

It’s looking more and more like Brett Rypien will get his second start when the Broncos (1-3) visit New England (2-2). Drew Lock (right shoulder) practiced again Thursday but Rypien got most of the first-team work again.

Part of Lock’s evaluation, Fangio said, is determining whether he's mentally and physically ready to take a hit on his tender right shoulder, something that can't truly be known until he gets back in a game.

Fangio said Lock’s chances of playing this weekend wouldn’t increase if the NFL decides to delay Sunday’s game because of the Patriots’ COVID-19 cases.

“I don’t think 24 hours would make much of a difference in that case,” Fangio said.

Safety Justin Simmons said players are talking about the Tennessee Titans’ coronavirus outbreak, its effect on enhanced safety protocols and the possibility it could derail the NFL season altogether.

However, Simmons said this crisis is something that was anticipated.

“Most of the guys that signed up for the season knew that there was going to be some type of bumpy road along the way,” Simmons said.