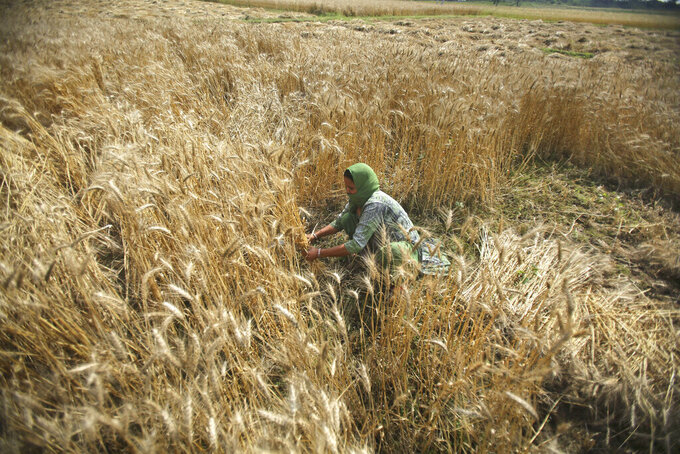 An Indian woman harvests wheat during lockdown on the outskirts of Jammu, India, Wednesday, April 22, 2020. As governments around the world try to slow the spread of the coronavirus, India has launched one of the most draconian social experiments in history, locking down its entire population, including an estimated 176 million people who struggle to survive on $1.90 a day or less. (AP Photo/ Channi Anand)

THE HEALTH BIZ: In this era of dire medical need, hospitals and other parts of the health sector have seen incoming revenue erode to almost nothing.

— Quest Diagnostics' testing volumes dropped more than 40% during the last two weeks of March, including COVID-19 testing. The company said in a regulatory filing that its cost-cutting measures include salary reductions for executives, suspension of its 401 (k) match, fewer hours for employees whose work has significantly declined and furloughs for employees with diminished work who expressed interest. Quest withdrew its full-year financial outlook.

— Products made by Medtronic are essential in the fight against COVID-19, but that's just a sliver of what the company produces, and sales of those other goods have plummeted. Non-emergency procedures unrelated to the outbreak have come to a standstill.

Weekly revenue in the U.S. have tumbled 60% since the middle of March, when compared with last year. At the same time, spending at Medtronic is churning along with a vast need for its ventilators.

EARNINGS SEASON: Nearly a fifth of S&P 500 companies are posting quarterly earnings this week. Like Delta's first-quarter report Wednesday, it's bad, but not as bad as it's going to get in the current quarter. Yet emerging details are providing a glimpse at the scope economic damage.

— AT&T withdrew its financial guidance for the year after the pandemic weighed down its revenue and profit in the first quarter. Revenue fell 4.6% to $42.8 billion, with $600 million tied to falling wireless equipment sales in the outbreak and canceled sports events like the NCAA basketball tournament.

Sales also fell 12.2% at WarnerMedia, the TV and film business, as AT&T prepares to launch HBO Max at the end of May. The shutdown throws a wrench into AT&T’s hopes for HBO Max amid the growing competition for streaming services as companies postpone some original programming.

— Knight-Swift Transportation, one of the trucking companies that is navigating radical changes in orders and demand, reported a 6.6% decline in revenue during the first quarter, and a 20.8% plunge in net income. But the results were better than Wall Street had expected.

The Arizona company spent $2.3 million on new safety measures and expects the same for the current quarter.

THE NEED FOR FEED: Agriculture and livestock producers have been turned upside down by the outbreak. The labor intensive industry finds itself short of workers, and its distribution channels scrambled.

— Italy’s government is trying to quickly legalize unregistered farm workers, both foreign migrants and Italians, so they can harvest fruit and vegetables in Italy’s upcoming spring and summer harvest seasons.

Italian farm lobby Coldiretti has warned that harvests are at risk given the estimated 370,000 seasonal workers who usually travel to Italy at this time of year, mostly from Eastern Europe, are stuck at home due to travel restrictions.

Interior Minister Luciana Lamorgese said Wednesday that the government was speeding up its study of proposed legalization of “irregular” workers and hoped to have a solution.

— Vendors selling vegetables, fruit and dairy products returned to Serbia’s markets Wednesday as restrictions on open-air facilities are eased. Sellers wore gloves and masks, as did the trickle of customers who arrived to by fresh produce, a long-held tradition in the central Belgrade.

RESTARTING GRADUALLY: Amid the push to reopen the economy, some manufacturers are setting dates for resuming operations.

— Volkswagen says it will reopen its U.S. factory in Chattanooga, Tennessee, on May 3. The company says the plant will restart gradually, in line with restrictions being lifted by state and county governments. Production was suspended March 21.

Volkswagen says it will provide masks and gloves to workers, check temperatures before employees enter, set up six-foot barricades and floor markings, and increase how often door handles and machinery are cleaned. The plant employs 3,800 workers who make the Passat sedan and Atlas SUV.

— Stocks around the world moved higher and the S&P 500 climbed toward its first gain of what’s been a dismal week. Even the oil market gained ground.

LOST THAT LOVING FEELING: The $525 million deal for Victoria’s Secret may become another casualty of the pandemic.

Private equity firm Sycamore Partners is seeking to terminate a February agreement to buy a 55% stake in the lingerie maker. The current owner, L Brands, shuttered all of its stores last month, skipped rent payments, and furloughed most of its staff. Those actions, Sycamore said in a lawsuit, are violations of the purchase agreement.

L Brands said Wednesday that it will vigorously defend itself against the suit.