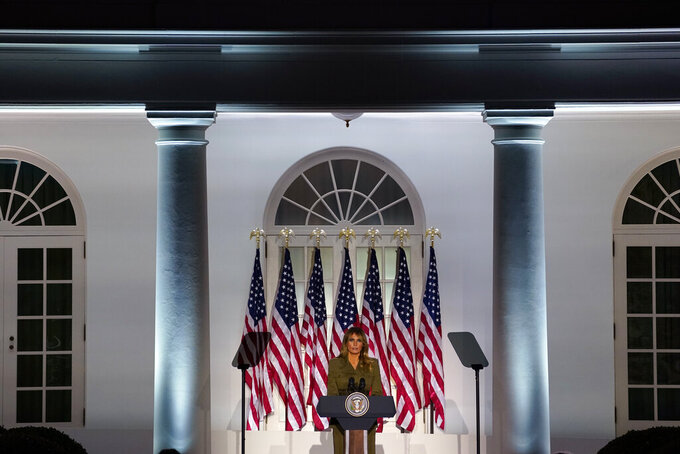 First lady Melania Trump speaks on the second day of the Republican National Convention from the Rose Garden of the White House, Tuesday, Aug. 25, 2020, in Washington. (AP Photo/Evan Vucci)

While others at the Republican National Convention spoke about the coronavirus largely as a challenge successfully conquered, the first lady on Tuesday night used her address from the Rose Garden to acknowledge the pain of lives lost and families upended by the pandemic.

“I want you to know you are not alone,” she said to the tens of thousands of families that have been affected. More than 177,000 Americans have been killed by COVID-19, the disease caused by the virus.

She promised help fighting the “invisible enemy” was on its way from a determined President Donald Trump.

“My husband’s administration will not stop fighting until there is an effective treatment or vaccine available to everyone,” she said, speaking to an audience that included the president, the vice president and his wife, and her parents.

“Donald will not rest until he has done all he can to take care of everyone impacted by this terrible pandemic,” she added in remarks softer in tone than many who spoke before her.

President Trump sought to play down the virus at the beginning of the outbreak, and his handling of the pandemic has been widely criticized by doctors and other medical professionals. While Trump regularly refers to COVID-19 as the “China virus,” Mrs. Trump did not. Mrs. Trump spoke before an audience of several dozen people whose seats were set about 2 feet apart from one another, not the recommended 6 feet apart. Few wore face masks.

She used the night's keynote speech to advocate for four more years as president for her husband, give a nod to ongoing racial unrest across the country and discuss her own goals for a second term. Although she said she didn't want to attack anyone, “because as we saw last week, that kind of talk only serves to divide the country further,” she joined speakers before her in criticizing the news media.

“No matter the amount of negative or false media headlines, or attacks from the other side, Donald Trump has not and will not lose focus on you,” she said.

“The future of our country has always been very important to him, and it is something that I have always admired,” said the first lady, who met Trump in New York City in 1998, two years after arriving in the U.S. from her native Slovenia, a former communist country in eastern Europe.

“He doesn't just speak words. He demands action, and he gets results,” she said.

Amid ongoing civil unrest in Kenosha, Wisconsin, after the police shooting of a Black man, Mrs. Trump urged Americans to stop the violence. She recalled her visit in 2018 to the West African nation of Ghana, where she learned about the slave trade.

“It is a harsh reality that we are not proud of parts of our history,” she said. “We must remember that today we are all one community. Our diverse and storied history is what makes our country strong, and yet we still have so much to learn from one another.”

“I also ask people to stop the violence and looting being done in the name of justice and never make assumptions based on the color of a person’s skin,” she added. She did not mention the Wisconsin shooting.

Mrs. Trump said she would build on her “Be Best” youth initiative, if her husband is reelected, and would work with states to pass legislation to take care of children. She said she'll continue her work on foster care and with tribal nations, as well as preserving the White House.

“I’m here because we need my husband to be president and commander in chief for four more years,” she said, acknowledging his habit of sharing his feelings — good and bad — on Twitter.

“Total honesty is what we as citizens deserve from our president,” his wife said. “Whether you like it or not, you always know what he’s thinking. And that is because he is an authentic person.”

Just like Trump has upended norms of the presidency, Melania Trump has altered what it means to be a modern first lady, from continuing to live in New York City in the administration's opening months to forcing the ouster of a deputy national security adviser. Not since Nancy Reagan has any first lady asserted herself so publicly in West Wing personnel matters.

Like the president, her tenure can also be defined by its ups and downs.

The first lady arranged a splashy launch for the “Be Best" initiative, but was put on the defensive for including anti-cyberbullying when the president regularly uses Twitter to attack anyone he feels has betrayed him.

She rushed to the southern border to visit migrant children after the administration started separating families at the border with Mexico, a rare instance where she publicly opposed the president's policy.

But en route, the former fashion model donned a green hooded jacket with “I Really Don't Care, Do U?” scrawled on the back. She didn't wear it around the children, but the baffling wardrobe choice quickly overshadowed the goodwill border visit.

Her announcements this year of two costly though privately funded White House improvement projects — construction of a tennis pavilion and a Rose Garden renovation — opened her to charges of tone-deafness and a flurry of social media commentary likening her to France's Marie Antoinette. She tweeted that the naysayers should “contribute something good & productive in their own communities" instead of criticizing her.

Mrs. Trump said months ago that she's ready for another four years.

The first lady spoke from the recently renovated Rose Garden, despite questions about the propriety of using the White House for an overtly political purpose. The coronavirus forced her to scrap many of her 2020 plans, including headlining her first Trump fundraisers.