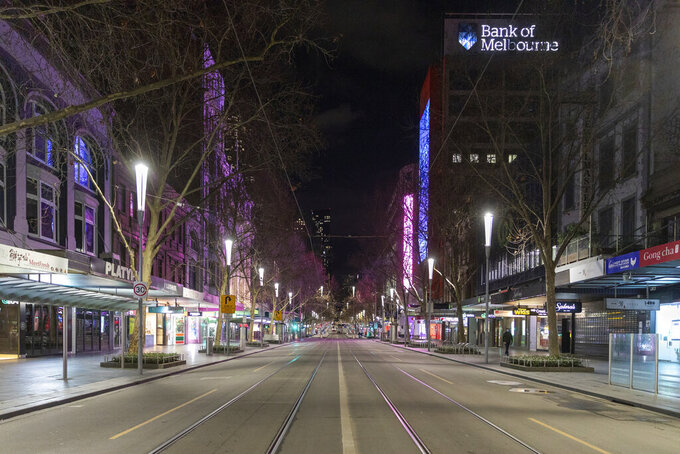 FILE - In this Aug. 5, 2021, file photo, an empty Swanston Street is seen at night in the Central Business District as lockdown due to the continuing spread of COVID-19 prepares to start in Melbourne. Melbourne, the city that was once Australia’s worst COVID-19 hot spot has announced a seven-day lockdown, its fourth since the pandemic began. (AP Photo/Asanka Brendon Ratnayake, File)

CANBERRA, Australia (AP) — Australia’s second-largest city was set to enter its fourth lockdown Thursday as concern grew over the rapid spread of infections from a coronavirus variant.

The seven-day lockdown for Melbourne and the rest of Victoria state comes after a new cluster in the city rose to 26 infections, including a person who was in intensive care. Another 10,000 people have had some degree of contact with those already infected.

“Unless something changes, this will be increasingly uncontrollable,” Victoria Acting Premier James Merlino said.

The federal government declared Melbourne a hot spot, which entitles the city to additional federal resources. Prime Minister Scott Morrison said 218 military personnel were in Victoria helping in pandemic operations and more would be sent if Merlino asked.

Additional vaccine doses were also being sent to Victoria. Only 3.9 million vaccines doses have been administered among Australia’s population of 26 million.

Health Minister Greg Hunt described the lockdown, which begins at midnight, as “highly regrettable, but necessary restrictions under the current circumstances.”

People will only be able to leave home to shop for food and essential items, provide or receive care, exercise, work or study if they are unable to do so from home, and to get vaccinated. Masks will be compulsory indoors and outdoors.

Cafes and restaurants will only be able to offer takeout and schools will close. Professional sports events in Melbourne will continue, but without crowds.

Chief Medical Officer Paul Kelly said the variant was the same one identified in India and designated by the World Health Organization as a variant of concern. It was more transmissible than some variants.

The states of Western Australia and South Australia are restricting travel from Victoria and New Zealand has halted quarantine-free travel to Melbourne.

The new Melbourne cluster was found after a traveler from India became infected while in hotel quarantine in South Australia state earlier this month. The traveler was not diagnosed until he returned home from Adelaide to Melbourne.

The city of 5 million people became Australia’s worst hot spot last year. Infections peaked at 725 new cases in a single day in August at a time when community spread had been virtually eliminated elsewhere in the country.

That lockdown lasted for 111 days. A third lockdown that lasted for five days in February was triggered by a cluster of 13 cases linked to hotel quarantine near Melbourne Airport.