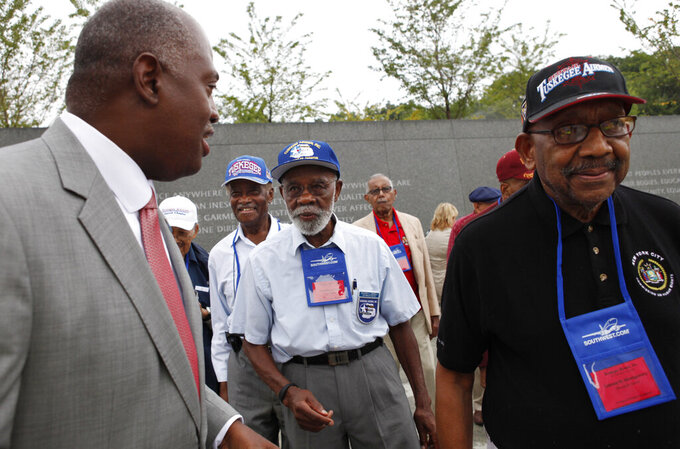 FILE - In this Aug. 3, 2011, file photo, Harry E. Johnson Sr., left, president & CEO of the Martin Luther King Jr. Foundation, takes Tuskegee Airmen, including Theodore Lumpkin Jr., center, and Dabney Montgomery, right, on a tour of the Martin Luther King Jr. Memorial in Washington. Lumpkin has died from complications of the coronavirus, it was announced Friday, Jan. 8, 2021. Lumpkin was just days short of his 101st birthday. Lumpkin, a Los Angeles native, died Dec. 26, according to a statement from Los Angeles City College, which he attended from 1938 to 1940. (AP Photo/Jacquelyn Martin, File)

LOS ANGELES (AP) — One of the famed Tuskegee Airmen — the first Black pilots in the segregated U.S. military and among the most respected fighter pilots of World War II — has died from complications of the coronavirus, it was announced Friday.

Lumpkin, a Los Angeles native, died Dec. 26, according to a statement from Los Angeles City College, which he attended from 1938 to 1940.

Lumpkin was drafted in 1942 and assigned to the 100th Fighter Squadron in Tuskegee, Alabama. The Tuskegee Airmen escorted bombers in Europe.

Lumpkin wasn't a pilot because his eyesight wasn't good enough, but he served as an intelligence officer who briefed pilots on missions, according to the Los Angeles Times, which confirmed his death through his son, Theodore Lumpkin III.

Lumpkin’s wife, Georgia, told the Times that he didn’t talk much about his experiences with the airmen.

“”We were married for a number of years until I heard about them,” she said. “When I realized who these guys were and what they’d done, I was just overcome at how much they persevered. They did not bow down. They achieved things that detractors said they couldn’t, weren’t capable of doing.”

After the war, he earned an undergraduate sociology degree at the University of Southern California, became a social worker with Los Angeles County and after retiring went into a second career in real estate.

In 2007, the Tuskegee Airmen were collectively awarded the Congressional Gold Medal. He also was among the surviving airmen invited to attend the presidential inauguration of Barack Obama in 2009.

Lumpkin is survived by his wife, two sons, a daughter, several grandchildren and a great-grandchild.