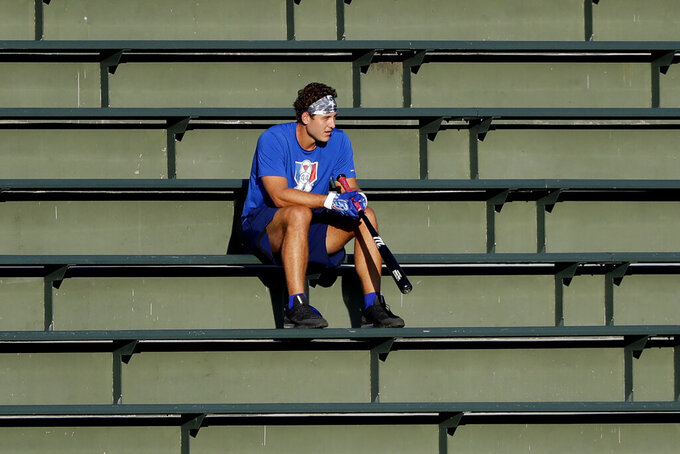 CHICAGO (AP) — Opening day is next week, and there is some unease for New York Mets ace Jacob deGrom and Chicago Cubs first baseman Anthony Rizzo because of back issues. It looks as if New York Yankees star Aaron Judge is feeling much better.

The Mets sent deGrom for an MRI on Wednesday after the right-hander pitched just one inning in a summer camp appearance due to back tightness. The test showed nothing to be concerned about, according to a person familiar with the situation.

The person spoke on condition of anonymity because no immediate announcement on deGrom’s medical condition was planned.

An MRI of Rizzo on Tuesday showed rib-head inflammation on his left side that is causing back spasms — a condition he has dealt with before in his career.

“Frustrating, just because how physically in shape I felt like I was coming in,” Rizzo said. “Just can't control the flareups. The MRI getting kind of what we knew, just confirming it. Just kind of getting it to calm down and get back out there as fast as I can.”

Judge has been hampered by a stiff neck, but the outfielder homered off James Paxton during New York's intrasquad game at Yankee Stadium. The Yankees also said Masahiro Tanaka was scheduled for a bullpen session Thursday in his first action since he was struck on the head by Giancarlo Stanton's liner on July 4.

The loss of deGrom or Rizzo for an extended period would be a huge blow for either of their teams — especially in a shortened 60-game season.

The 32-year-old deGrom won his second consecutive NL Cy Young Award in 2019, finishing with a 2.43 ERA and NL-best 255 strikeouts in 204 innings. If deGrom is unable to go on opening day against Atlanta on July 24, Marcus Stroman, Rick Porcello or Steven Matz could get the ball.

Rizzo, who is expected to bat second in Chicago's lineup, hit .293 with 27 homers and 94 RBIs last year. Kris Bryant and Victor Caratini could fill in at first if Rizzo has to begin the season on the injured list.

“He doesn't seem worried,” Cubs manager David Ross said. "I think the main thing is that we're progressing in the right direction.”

While injuries put the opening-day plans for New York and Chicago in question, the coronavirus continued to have a dramatic effect on rosters across the sport.

Twins first baseman Miguel Sanó was cleared to join the team after testing positive for the virus upon his arrival in Minnesota. Royals catcher Salvador Perez is back after his own positive test. Same for outfielder Anthony Santander in Baltimore and slugger Derek Dietrich in Cincinnati.

“It changed my way of thinking," Dietrich said. "It humbled me and motivated me. I have empathy for anyone dealing with this because it sucks. It really does. I didn’t have symptoms but just knowing and thinking, ‘Well, who was I around?’ This isn’t about you. A lot of people are dealing with this. It is real. It is very real.”

Santander suited up for the first time Tuesday and went through a rigorous workout in an effort to make up for lost time. He is hoping to be part of the starting lineup when Baltimore visits Boston for opening day on July 24.

“This was something serious,” Santander said. “Thank God I had only mild symptoms.”

Perez was cleared with a second negative test in a 24-hour period late Tuesday, and Kansas City manager Mike Matheny said the news gave the entire club a boost — especially with Brad Keller, Ryan O’Hearn and Cam Gallagher still sidelined by the virus.

“It was the perfect timing for a shot in the arm,” Matheny said.

Catchers like Perez are in a bit of a precarious position on the field, with their inability to socially distance with the umpire and batter also around the plate.

Kyle Higashioka, who became the Yankees’ backup catcher following the departure of Austin Romine, is wearing another mask during intrasquad matchups and plans to during games.

“I’m kind of in an enclosed in the vicinity with a couple other people, so might as well just throw the face covering on just in case,” he said. “Not sure if it will help of not.”

“It’s a nice, cool material, so it doesn’t really hinder me,” he said. “I don’t like wearing it hitting because it like kind of messes with me turning my head. But for catching, it’s nothing really that bugs me about it.”