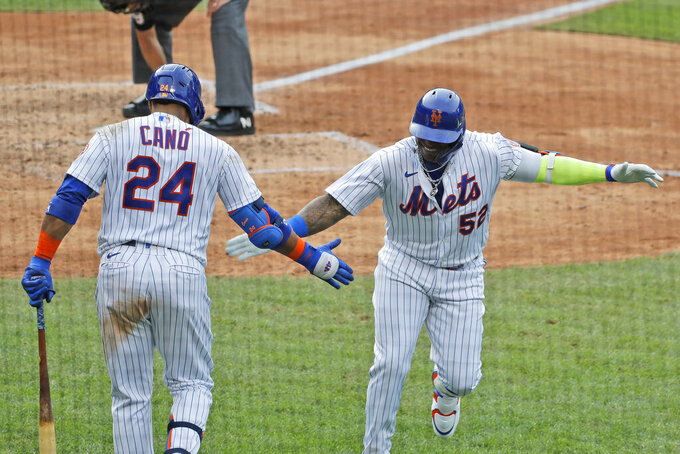 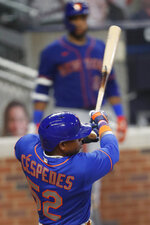 ATLANTA (AP) — When the New York Mets finally found out Yoenis Céspedes was OK, they suddenly learned something else: The slugger had opted out of playing the rest of this season.

Hours after Céspedes didn’t report to the ballpark without explanation, the Mets discovered in the late innings of Sunday’s 4-0 loss to Atlanta that he wouldn’t be back this year because of coronavirus concerns.

“I am very surprised,” first-year manager Luis Rojas said. “Him and I have had conversations regularly about playing time, where he was going to hit in the lineup, building him up in the outfield.”

“Nothing like this, so this is definitely a surprise,” he said.

The Mets sent out a statement from general manager Brodie Van Wagenen in the early innings Sunday saying they couldn’t find Céspedes. Van Wagenen said the organization was later notified by Céspedes’ agent that he had decided to opt out for “for COVID-related reasons.”

Céspedes joined Giants catcher Buster Posey, Dodgers pitcher David Price and Washington infielder Ryan Zimmerman in opting out this season, all of them announcing their decisions before the virus-shortened 60-game season began in late July. Atlanta outfielder Nick Markakis also chose not to play this year, then changed his mind.

A two-time All-Star outfielder, the 34-year-old Céspedes celebrated his long-awaited return to the lineup with a home run on opening day that lifted the Mets over the Braves 1-0 at Citi Field.

It was his first game in the majors since July 20, 2018. He missed most of the past two years with a series of leg problems, getting surgery on both heels and then a broken ankle after a tumble at his Florida ranch in a supposed run-in with a wild boar.

But Céspedes struggled with his timing after that the uplifting home run, and didn’t seem comfortable at the plate.

Asked whether he sensed Céspedes opted out because he was frustrated over his slow start, Van Wagenen said he couldn’t comment on such speculation.

“It’s disappointing for the fans and from my vantage point. Everyone enjoyed watching him at his best. He worked hard in his rehab. This is a disappointing end to his four-year agreement, but it wasn’t for lack of work ethic,” he said after the Mets' fifth straight loss.

Céspedes had been the Mets’ designated hitter this season, taking advantage of a new rule this year that allows DHs in the National League.

Céspedes was acquired in a trade with Detroit during the 2015 season and his power helped put the Mets into the World Series. An All-Star in 2016, he signed a $110 million, four-year deal after the season, but was never the same.

The Mets also made two trades, getting outfielder Billy Hamilton and dealing away pitcher Tyler Bashlor.

The speedy Hamilton was acquired from San Francisco for right-hander Jordan Humphreys. The 29-year-old Hamilton was part of the Giants’ 60-man player pool, but hadn’t been in a game this season.

A switch-hitter, Hamilton ranks third among active players with 299 career stolen bases, and has been safe on 81.3% of his tries. Hamilton hit a combined .218 for Kansas City and Atlanta last year.

“We’ve endured injuries and it is next man up. We want to add depth which is why we made the trade for Hamilton before the game,” Van Wagenen said.

The 24-year-old Humphreys was designated for assignment by New York on July 29. He was an 18th-round draft pick in 2015.

Bashlor was acquired for cash. The 27-year-old didn’t pitch for the Mets this season after getting into 24 games last year. He was designated for assignment on July 28.

The Pirates designated lefty Robbie Erlin for assignment. He pitched in two games this season.