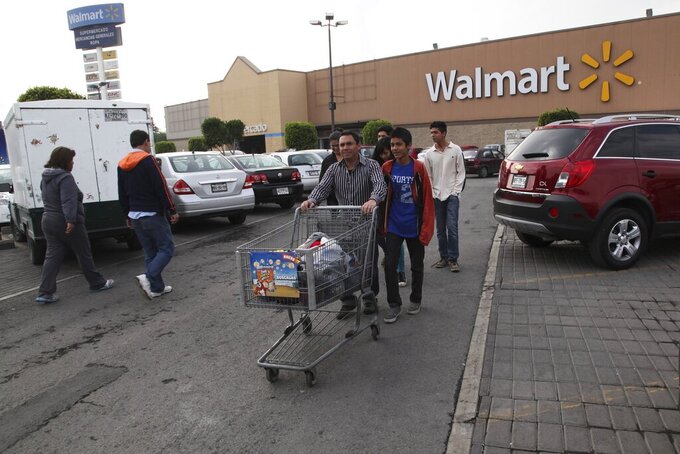 FILE - In this Dec. 26, 2013 file photo, a family leaves a local Walmart in Mexico City. Walmart de Mexico, the country’s biggest retailer, announced the week of June 18, 2021, that its grocery store baggers wouldn’t be allowed back, as the coronavirus pandemic and changing consumer habits threaten to put an end to a decades-old practice of allowing elderly people in Mexico to earn extra income as baggers. (AP Photo/Marco Ugarte, File)

MEXICO CITY (AP) — The coronavirus pandemic and changing consumer habits threaten to put an end to a decades-old practice of allowing elderly people in Mexico to earn extra income as grocery store baggers.

Baggers over 60 had expected to return to stores last month as pandemic restrictions eased in Mexico City. But Walmart de Mexico, the country’s biggest retailer, announced this week that they wouldn’t be allowed back.

The retail chain said Mexico City's ban on plastic bags and the pandemic meant customers no longer want other people touching their groceries.

“Due to the health emergency, we have seen that our customers want to avoid third parties having contact with their purchases,” Walmart de Mexico said in a statement. “Added to this is the fact that under current law to protect the environment, we have stopped giving free, single-use plastic bags.”

“For this reason, our customers now bring their own reusable bags and they have become used to packing their own purchase,” the statement continued.

Elderly baggers have held a series of protests over the last two weeks outside grocery stores and government offices, holding signs reading “We Want to Work!”

“It’s not fair,” former grocery bagger Maria Guadalupe Garcia told the Telediario news program. “I don’t have anything other than this.”

Lourdes Cuca put it this way: “I need to work, because it is my emotional support.”

The “jobs” — they are considered “volunteers," not employees — are hardly lucrative. Some customers give them tips of about 1% of the bill or less, with many just leaving five or 10 cents.

In some places in Mexico, teenagers are baggers, but in others the elderly were given spots under a program arranged many years ago with the government's National Institute for the Elderly. Walmart said it had notified the Institute in December that the arrangement would not be renewed.

But the baggers only got word of the change in May, when Mexico City loosened pandemic restrictions amid a drop in case numbers. That is because the elderly baggers — whose age puts them at higher risk for severe COVID-19 — had not been working at the stores since March 2020, and many had only recently contemplated the possibility of going back.

It's not just Mexico City; in early June, the legislature in the northern state of Tamaulipas approved a resolution urging that fully vaccinated elderly adults be allowed to return to work as grocery baggers “to obtain some more income for themselves and their families.”

Fadlala Akabani, Mexico City's secretary of economic development, said there are about 35,000 elderly baggers nationwide, and about 4,400 in the capital.

But if consumer habits really have changed, it's not clear how many other grocery chains will be open to the idea.

Under a program started by President Andrés Manuel López Obrador, people over 68 in Mexico receive a monthly supplementary income payment of about $65 per month. But given Mexico's woefully insufficient and spotty pension programs, many elderly people can't make ends meet.

At the same time, they complain that most employers are unwilling to hire them, a situation that will probably only get worse in the wake of the pandemic.

“A weak pension system, an increase in under-the-table work and unfavorable labor market conditions are factors that affect the well-being of elderly people,” the Institute said in a statement. “A lot of elderly people are still independent and able to function, and they want to continue working and earning money, to make them feel useful and fulfilled.”