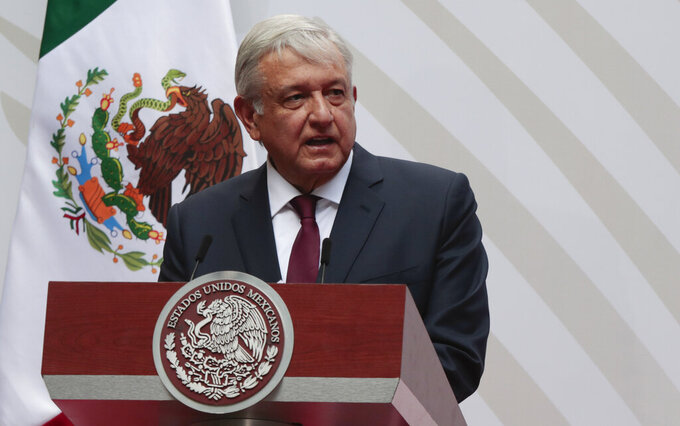 FILE - Mexican President Andres Manuel Lopez Obrador speaks at the National Palace in Mexico City on April 5, 2020. The countries which top the rankings of COVID-19 deaths globally are led by populist, mold-breaking leaders like Obrador. The U.S., Brazil, the United Kingdom and Mexico all are led by leaders who have been skeptical of the scientists and who initially minimized the disease. And their four countries alone account for half of the total 585,000 COVID-19 deaths worldwide so far, according to statistics tracked by Johns Hopkins University. (AP Photo/Eduardo Verdugo, File)

The extradition of a former head of the state-run oil company this month has provided a near daily leak of juicy details about information that the ex-executive, Emilio Lozoya, is allegedly sharing with the Attorney General’s Office.

On Friday, the president gave a 20-minute response to a question about the latest details reported by the newspaper Reforma, which said it obtained a document that Lozoya prepared before his extradition about what he knows.

“It’s known that money from Odebrecht was used to finance that campaign,” López Obrador said, adding that he had complained at the time to electoral authorities that Peña Nieto’s campaign was exceeding spending caps.

Documents that Mexican prosecutors used to make their case for extradition to Spanish authorities indicated Lozoya gave some of that money to the campaign and kept a hefty chunk of it for himself to buy a house.

Odebrecht allegedly kicked in an additional $6 million once Peña Nieto was in office. Some of that money was allegedly used to bribe federal lawmakers into voting for his signature energy reform package, known as the Pact for Mexico.

Asked if the Attorney General’s Office should call Peña Nieto in for questioning, López Obrador said if prosecutors consider it necessary, all of those involved should be questioned. He said the allegations also include the administration of Peña Nieto's predecessor in the presidency, Felipe Calderon of the National Action Party.

Since he took office López Obrador has said he would pursue former presidents for corruption only if the public demanded it through a vote. On Friday, he hedged, adding, “I can’t stop a judicial process.”

The National Action Party said in a statement Friday that it is committed to fighting corruption. It added that its lawmakers did not need to be persuaded to vote for the energy reform because they were already in favor.

López Obrador even had his press secretary read out loud two columns this week from journalist Carlos Loret de Mola, usually a favorite target of the president’s wrath. One of the columns concerned the alleged bribes to lawmakers, the cash for which purportedly was kept in large safes by Lozoya in a series of apartments around a ritzy Mexico City neighborhood. The other column described how Peña Nieto used government resources to extract support from governors and legislators.

López Obrador had video clips of him making similar allegations before he was president played on a large screen at his daily news conference.

The scandal was effectively kept under wraps during Peña Nieto’s administration. While other governments in the region prosecuted dozens of officials involved in Odebrecht’s bribery schemes, Mexico’s investigation went nowhere.

That it is emerging now is fortuitous timing and a welcome distraction as López Obrador struggles with dual health and economic crises. On Thursday, the government reported its highest single day coronavirus infection total with 8,438 newly confirmed cases, taking Mexico’s total over 370,000, with nearly 42,000 deaths.

The economy, which was already in recession before the pandemic, is expected to contract 10% this year.