Michelle Obama aims to give a million meals in new campaign 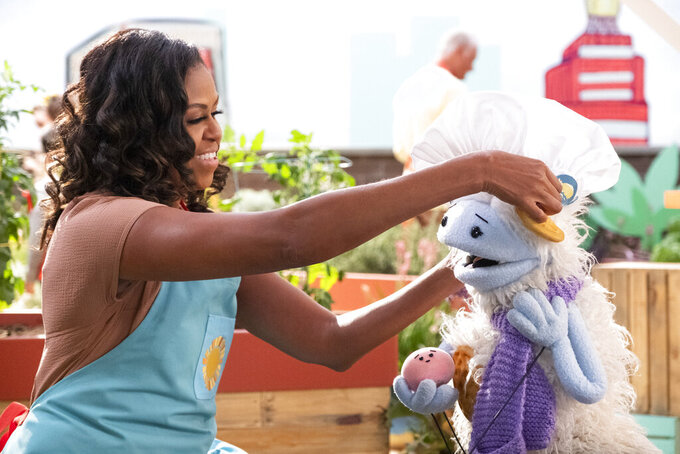 This image released by Netflix shows former first lady Michelle Obama putting a chef's hat on Waffles, a furry puppet with waffle ears and holding Mochi, a pink round puppet, on the set of the children's series "Waffles + Mochi." Obama is launching the new Netflix children’s food show on March 16. (Adam Rose/Netflix via AP)

Michelle Obama is launching a nonprofit campaign that aims to provide more than 1 million meals to food-insecure families in connection with the debut Tuesday of her children’s food show on Netflix.

The “Pass the Love w/ Waffles + Mochi” initiative, named after the new series ”Waffles + Mochi," is a collaborative campaign by the nonprofit Partnership for a Healthier America, its honorary chair Obama and Higher Ground Productions, the production company owned by the former first lady and her husband, former President Barack Obama.

The nonprofit says the campaign was inspired by the series, which tells the story of two puppet friends who “travel the world exploring the wonders of food and culture while learning how to cook with fresh ingredients.”

Walmart and Blue Apron have jumped in to support the initiative, which also aims to “leverage the show, its characters, and Mrs. Obama to meaningfully shift our food culture toward more affordable, fun, at-home meals for families of every income level,” according to the nonprofit.

PHA President and CEO Nancy Roman told The Associated Press that the two companies will contribute funds to the campaign and raise money for it among their customers. More than half the money is expected to come from the public, Roman says.

The nonprofit was created in conjunction with Michelle Obama’s Let’s Move! effort in 2010. The former first lady, who has long been a champion of healthy eating, said in the announcement last week that the idea is to “help make sure families all over the country can access fresh, nutritious food” amid the devastating impacts of the coronavirus pandemic.

The U.S. has seen a significant rise in hunger during the virus outbreak. One estimate from the organization Feeding America says around 45 million Americans in 2020 may have experienced food insecurity — limited or uncertain access to adequate food — compared with 35 million in 2019.

Caitlin Caspi, a University of Connecticut professor who studies food insecurity, says the rise in unemployment, the closure of schools and disruptions across food systems -- like shortages of staple foods in the early days of the pandemic — all played a factor in the increase. And many, left with little options, turned to food banks for help.

“Meal boxes that provide fresh food and a complete set of ingredients to households are one way to reduce the impact of these food access disruptions, and to get healthy meals on the table,” she added.

The food service organization Genuine Foods will source and assemble the campaign’s meal boxes, which will then be distributed by local nonprofits in various cities. Roman says they will begin to roll out the campaign in cities that have the highest child poverty rates as the funds are raised.

The rollout will start in May, Roman says, and continue throughout the year. Each city deployment is expected to take place over four weeks.

“We’re thinking of a pace of about two a month,” Roman said. But, she added, “It will depend in part on how the campaign is going.”