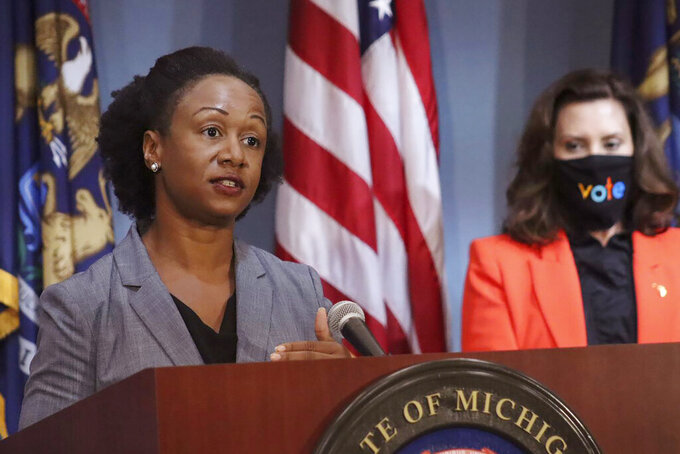 FILE- In a July 28, 2020 file photo, provided by the Michigan Office of the Governor, Dr. Joneigh Khaldun, the state's chief medical executive, addresses the state during a speech in Lansing, Mich. Michigan on Friday, April 16, 2021, extended by five weeks a pandemic order that limits business capacity and requires masks in public, even for young children in day care, as the state battles the country's highest daily coronavirus infection rate. (Michigan Office of the Governor via AP, File)

LANSING, Mich. (AP) — Michigan on Friday extended by five weeks a pandemic order that limits business capacity and requires masks in public, even for young children in day care, as the state battles the country's highest daily coronavirus infection rate.

The measure, which was expected and replaces one that had been due to expire Monday, says that in addition to existing measures, child care facilities and camps must make a “good faith effort" to ensure children ages 2 to 4 wear face coverings starting April 26. That age group was previously exempt.

The revision aligns with recommendations from the Centers for Disease Control and Prevention and the American Academy of Pediatrics, the state health department said. Conservatives criticized putting masks on 2-year-olds.

Democratic Gov. Gretchen Whitmer has resisted tightening restrictions that were in place during two previous COVID-19 surges, including prohibitions on indoor restaurant dining, in-person high school instruction and youth sports. She instead is urging a voluntary pause on the activities and pushing vaccinations and treatments.

The order, which goes through May 24 and was signed by Department of Health and Human Services Director Elizabeth Hertel, keeps intact mandatory regular testing of teen athletes. It was first issued in the fall following the state Supreme Court's invalidation of an emergency-powers law the governor had used to write orders.

Dr. Joneigh Khaldun, the state's chief medical executive and chief deputy director for health, described progress in vaccinations but said she was “incredibly concerned about our state’s COVID-19 data. We are still very much fighting this pandemic and seeing concerning trends in new cases and hospitalizations.”

The state's daily case rate has led the U.S. for weeks. The number of hospitalized adults with confirmed infections hit a record this week. At the end of March, Michigan was among four states where a more transmissible variant, first identified in Britain, accounted for more than half of cases, according to the CDC.

The seven-day average positivity rate, 17.1%, dipped in recent days but remained above a December peak of 14.4%. The seven-day case rate, 614 per million people, was below the November high of 738. About 19% of hospital beds were filled with COVID-19 patients compared to nearly 20% in December.

“We are begging for everyone in the community to do their part,” Kalamazoo nurse Jamie Brown, president of the Michigan Nurses Association, said in a statement. "Stay home. Wear a mask. Get a vaccine when you are able. We are barely able to keep our heads above water. We are in crisis. We need our communities’ help.”

At least 43% of residents ages 16 and older have gotten at least one dose, including 29% who are fully vaccinated.

The restaurant and hospitality industry supported the extended order, which continues to cap food establishments' occupancy at 50% and no more than 100 customers. It “very importantly opts not to close them a third time as has been suggested by some,” said Justin Winslow, president and CEO of the Michigan Restaurant & Lodging Association.

Republicans and others took to social media to question trying to make 2-year-olds wear a face covering.

This story has been corrected to show the Kalamazoo nurse is called Jamie Brown, not Jaime Brown.