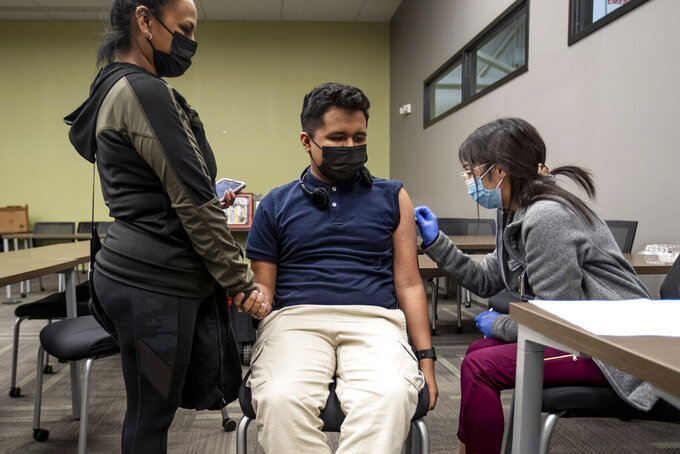 Veronica Diaz, 48, of Detroit stands by as her son Javier Belmares, 14, becomes nervous as he prepares to get his first Pfizer COVID vaccine shot by Medical Assistant Stephanie Yang during a vaccine clinic at Ideal Group in southwest Detroit on Thursday, May 13, 2021. School districts from California to Michigan are offering free prom tickets and deploying mobile vaccination teams to schools to inoculate students 12 and up so everyone can return to classrooms in the fall. They are also enlisting students who have gotten shots to press their friends to do the same. (Ryan Garza/Detroit Free Press via AP)

LANSING, Mich. (AP) — Michigan Republicans on Tuesday advanced a bill that would prohibit state and local health officials from requiring COVID-19 vaccinations for children under age 18.

The concept is not under consideration in the state. But GOP senators said they want to be proactive.

“While they might not be mandating something, they're certainly creating a scenario where mandates are being pushed. I just wanted to ensure that that wasn't going to happen in this space. Parents should be allowed to make the decision on this,” Sen. Lana Theis, of Brighton, said of her legislation that would prevent the use of a state or local emergency order to require coronavirus vaccines for minors. It won Senate approval on a 20-16 party-line vote and was sent to the Republican-controlled House.

Democrats called the bill needless and noted that if the COVID-19 vaccine were added to the list of immunizations children need to attend school, the state allows for exemptions.

“A parent can opt out of having their children vaccinated for medical reasons, for religious reasons or for philosophical reasons. To prohibit a requirement for something for which there is no precedent of a requirement nor any proposal to create such a requirement is simply unnecessary,” said Sen. Winnie Brinks, of Grand Rapids. “This bill is simply another solution in search of a problem.”

For the second straight session day, the House adjourned without voting on GOP-backed legislation that would bar governments from issuing a COVID-19 vaccine passport, requiring proof of vaccination to access a public service or imposing a fee or penalty based on vaccination status. The sponsor may be making changes to the bill.

It would apply to the state, local governments, school districts, universities, community colleges and other entities primarily funded through state or local authority. The University of Michigan has said it will require students to be fully vaccinated to live on the Ann Arbor campus in the fall term.

Both bills would need to clear the other chamber before heading to Democratic Gov. Gretchen Whitmer, who has said state officials are not looking to mandate coronavirus vaccinations or to institute vaccination passports. About 58% of residents ages 16 and older have received at least one dose. The state's goal is to immunize at least 70%.

Whitmer spokesman Bobby Leddy said the vaccines are the best way for people to keep themselves and their families safe, but “the state has been very clear that we’re not currently exploring a vaccine passport concept, nor has there been any discussion about mandating vaccines. Instead of working with us to promote these lifesaving vaccines, Republicans are wasting time holding meetings with out-of-state conspiracy theorists and banning things that don’t exist.”