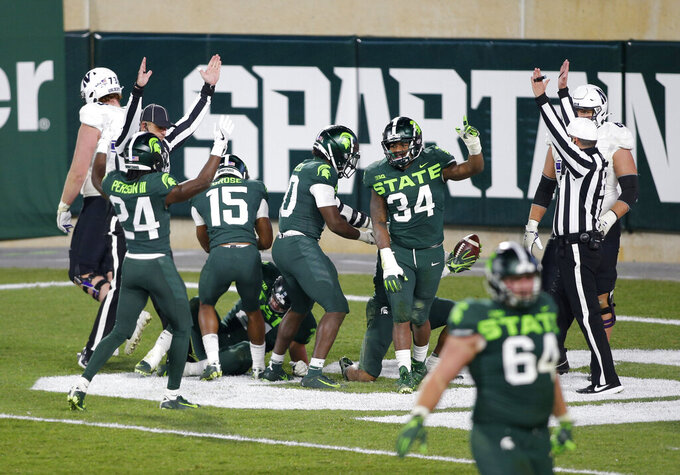 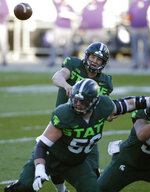 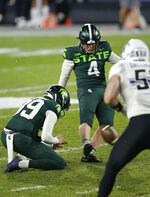 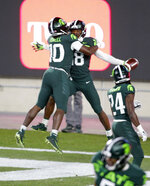 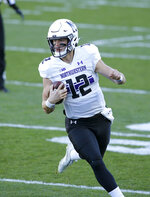 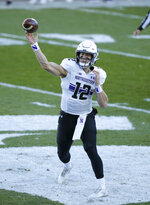 EAST LANSING, Mich. (AP) — No. 11 Northwestern put itself in position to play for the Big Ten title, then it hit the road.

Matt Coghlin made a tiebreaking 48-yard field goal with 3:35 left, and the Spartans handed Northwestern its first loss of the season with a 29-20 victory Saturday.

The Wildcats (5-1, 5-1) were coming off a 17-7 victory over Wisconsin that moved them into contention for a spot in the College Football Playoff. That prospect likely was dashed with the loss to the Spartans, but they remain in control of the Big Ten West.

“Really disappointed in the outcome, but we have all our goals in front of us," coach Pat Fitzgerald said. “We didn’t come up here and play clean football and Michigan State did and credit to them.”

The Spartans (2-3, 2-3) lost a 17-0 lead, but went back ahead by forcing three turnovers in the fourth quarter and making the most of two big kicks by Coghlin.

Michigan State had dropped consecutive games against Iowa and Indiana by a combined score of 73-7, including a 24-0 loss to the Hoosiers at home on Nov. 14. Last weekend's matchup with Maryland was canceled because of a COVID-19 outbreak with the Terrapins.

“We needed this win as a team," said Rocky Lombardi, who got the Spartans off to a fast start with a 75-yard touchdown pass to Jalen Nailor. “It’s good to get out there and beat a really good team like Northwestern because it’s just the kind of confidence boost we needed.

“We know we’re a good team and we know we can beat good teams, but it’s kind of hard to believe yourself until you do it."

It was the second win for first-year coach Mel Tucker after the Spartans beat Michigan on Oct. 31.

Northwestern grabbed a 20-17 lead on Cam Porter's 3-yard run early in the fourth.

Northwestern turned the ball over again, and receiver Berkeley Holman was carted off the field following the play.

Shakur Brown broke on Peyton Ramsey's pass for his second interception and made contact with Holman, who lay motionless on the field while the school's medical staff evaluated him.

Holman was carefully strapped to a backboard and lifted onto a cart. After Holman's teammates surrounded him to offer support, he lifted his left arm and extended his thumb.

Holman was taken to a hospital as a precaution. He was talking, alert and moving.

The Wildcats punted on their next possession, facing a fourth-and-10 from their 22, with a few minutes left.

Lombardi converted a third-and-8 from his 38 with a run after Northwestern called a timeout, taking time off the clock until punting from midfield with 32 seconds left.

The Wildcats ended the game by throwing laterals from deep in their end, trying to extend the play as time expired, only to have the Spartans recover the ball in the end zone for a touchdown at a fan-free game.

“A lot of self-inflicted wounds on our end," Fitzgerald said.

Northwestern will slip quite a bit after reaching its highest AP ranking since 1996.

Northwestern: Good fortune ran out for a team that had been a feel-good story as a surprising contender that won a lot of close games.

“I’ve got to coach the guys to be better than that, but I thought they were ready to play," Fitzgerald said.

Michigan State: Lombardi was 11 for 27 for 167 yards and two TDs to go along with one interception. He also made a couple of big plays with his legs, finishing with 65 yards on 10 carries.

“We’re just tired of losing," Lombardi said. “That’s what it comes down to. We want to win and we know we’ve got the players to win. We all just came together. We knew we a shot to win this game and we expected to win."

Northwestern plays at Minnesota on Saturday.

Michigan State hosts No. 3 Ohio State on Saturday, assuming the Buckeyes are cleared to play after they cancelled Saturday's game against Illinois due to a COVID-19 breakout within their program.