Mickelson added to field in a US Open without qualifying 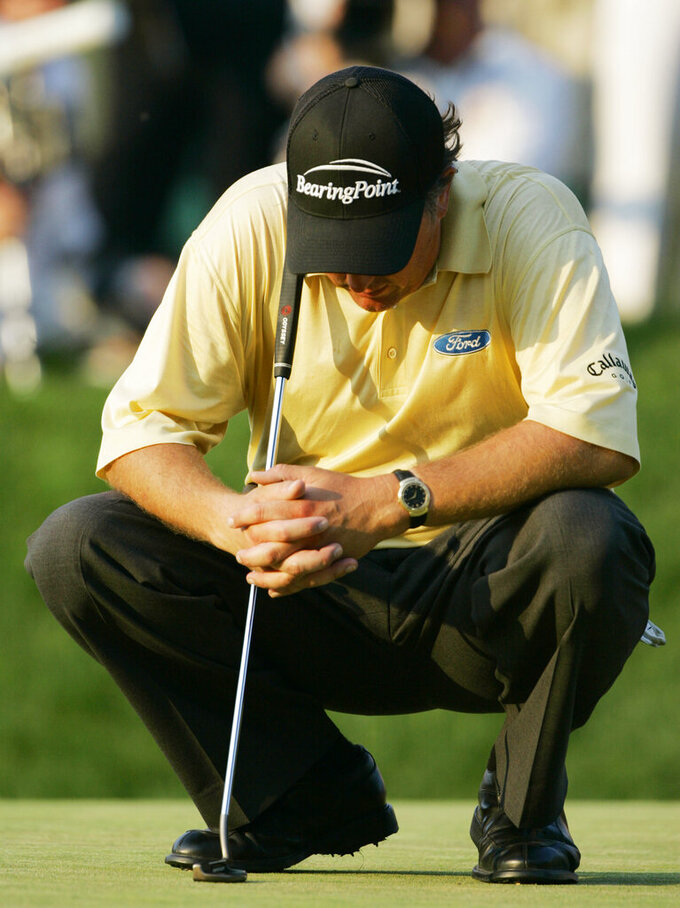 FILE - In this June 18, 2006, file photo, Phil Mickelson, of the United States, waits to putt on the 18th green in the final round of the U.S. Open at Winged Foot Golf Club in Mamaroneck, N.Y. Mickelson lost to Geoff Ogilvy of Australia. Mickelson is now exempt to return to Winged Foot for the U.S. Open in September. (AP Photo/Charles Krupa, File)

The USGA is leaning a little more on the world ranking and a lot more on tournament results over the next two months to fill the 144-man field for a U.S. Open that will be without open qualifying for the first time in nearly a century.

The exemption categories announced Thursday include a spot for Phil Mickelson.

A runner-up six times in the only major Lefty hasn’t won, the most devastating was in 2006 at Winged Foot, just north of New York City, where the U.S. Open is set to return Sept. 17-20.

The COVID-19 pandemic that forced the U.S. Open to move from June also cost the championship its identity of being open to all. Open qualifying wasn’t possible for two stages at nearly 120 courses across the country and into Canada, England and Japan.

The idea was to create a field that reflected a typical U.S. Open — the elite and the aspiring, from every continent in golf, pros and amateurs. And while it won’t be 36 holes of qualifying, it still comes down to playing well.

“We are excited that players will still have an opportunity to earn a place in the field,” said John Bodenhamer, senior managing director of USGA championships.

The top 70 from the world ranking on March 15 are exempt. Along with increasing that category by 10 spots, the USGA chose to use the last ranking before it was frozen during the shutdown in golf worldwide. That helps European Tour players, such as Eddie Pepperell and Robert MacIntyre, who are not able to play until July 9 — a month after the PGA Tour resumed with strong fields and big ranking points.

That also momentarily leaves out Daniel Berger, who went from outside the top 100 to No. 31 with his victory against a stacked field at Colonial. But the USGA will use the Aug. 23 ranking — after the first FedEx Cup playoff event — as its reserve list, and about seven spots are expected to come from there.

Mickelson was No. 61 when the ranking was frozen, and now is at No. 66. Mickelson, outspoken about the USGA and how it sets up U.S. Open courses, said in February that he would not ask for a special exemption if he was not otherwise eligible. With his five majors and Hall of Fame career — not to mention his legacy of silver medals in the U.S. Open — Mickelson likely would have received at least one exemption.

Now he won't have to worry about that. In 2006, Mickelson had a one-shot lead playing the 18th hole when he drove wildly to the left and tried to hit 3-iron over a tree. He hit the tree, hit into a plugged lie in the bunker and made double bogey to finish one shot behind Geoff Ogilvy.

"That worked out great, to be able to know that I have a chance to go back to Winged Foot and give it another shot," Mickelson said at the Travelers Championship. “As long as I’m playing well enough to compete to earn my way into the field, then I want to play and keep trying to win that tournament.”

Bodenhamer said the 36-hole qualifier in England typically is the strongest, along with one in Ohio after the Memorial. Thus, 10 spots will be awarded to the leading 10 players (not already eligible) from a separate points list of the opening five tournaments on the European Tour’s U.K. swing when its schedule resumes.

“We’ve got a pretty good mix of players,” Bodenhamer said. “Looking at the data, looking back at what the fields have been the last five years, there was a lot of Korn Ferry representation. We wanted to create pathways and allow those categories to earn their way in.”

That held true for the amateurs. The U.S. Open already has six amateurs who earned spots by winning the U.S. Amateur or British Amateur, for example. The USGA also will take the leading seven amateurs available from the world amateur ranking on Aug. 19.

The rest of the field is similar to what the British Open has done with its International Finals Qualifying for the PGA Tour. Two spots from the top 10 will earn exemptions from the Memorial, 3M Open, Barracuda Championship, FedEx St. Jude Invitational and Wyndham Championship. Three spots will be available from the PGA Championship.

And for the international presence, two spots will be given to the leader money winner in the most recent season on the Sunshine Tour in South Africa, the Asian Tour, the PGA Tour of Australasia and the Japan Golf Tour, which gets two spots.

“We think this is the best path forward,” Bodenhamer said.