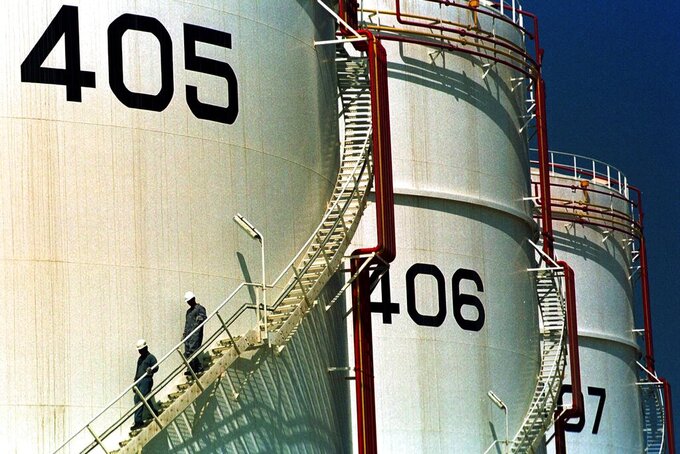 FILE- In this Sept. 25, 2000 file photo, two workers climb down from one of the tanks in an oil tank-farm in Jebel Ali, 25 miles (40 km) south of Dubai in the United Arab Emirates. The historic crash in oil prices in the wake of the novel coronavirus pandemic is reverberating across the Middle East as crude-dependent countries scramble to offset losses from a key source of state revenue. The economies of all the Arab Gulf oil exporters are expected to contract this year. (AP Photo/Kamran Jebreili, File)

BAGHDAD (AP) — Iraq is planning painful cuts in social benefits relied on by millions of government workers. Saudi Arabia will likely have to delay mega-projects. Egypt and Lebanon face a blow as their workers in the Gulf send back less of the much-needed dollars that help keep their fragile economies afloat.

The historic crash in oil prices in the wake of the coronavirus pandemic is reverberating across the Middle East as crude-dependent countries scramble to offset losses from a key source of state revenue — and all this at a time when several of them already face explosive social unrest.

The economies of all the Arab Gulf oil exporters are expected to contract this year, as much as 5% in Iraq, according to the International Monetary Fund.

While some Gulf countries can rely on a cushion of foreign currency reserves, nowhere in the region are the circumstances more dire than in Iraq, where oil sales fund 90% of the state budget.

Iraq saw massive protests in the past months by a populace angry over the weak economy and rampant corruption — and the turmoil could erupt again. Cutbacks in spending will only add to the pain for a population struggling to get by under coronavirus restrictions. In the capital’s Tahrir Square, protesters are still camped out, determined not to let their movement die.

“Coming into summer the conditions are developing for a perfect storm for the government,” said Sajad Jiyad, an Iraq-based analyst.

Oil is currently trading at $20 per barrel, dipping even lower some days to levels not seen since 2001. Further constraints will be felt as an OPEC agreement to cut production levels by 23% to stabilize the oil market takes hold. May and June are expected to be particularly difficult as that is when oil storage space will be full, making it harder for countries to market oil, according to Robin Mills, CEO of Dubai-based Qamar Energy.

So far it’s early, and no one has reached a stage where the budget runs out, Mills said. “But that is inevitable — Iraq will probably hit first.”

In its draft 2020 budget, Iraq had been counting on revenues from oil prices at $56 a barrel to fund badly needed development projects and the bloated public sector, costing nearly $45 billion in compensation and pensions. Oil Minister Thamir Ghadhban said recently that revenue from crude exports has dropped by 50%.

Now officials are debating difficult salary cuts. One proposed idea would defer paying public sector workers part of their social benefits until the financial sector improves, according to three Iraqi officials. The question is how much to cut and from whom; one recommendation is that higher-end earners take a 50% cut. The officials spoke on condition of anonymity so as not to derail ongoing talks.

That would save Iraq hundreds of millions of dollars, but risks triggering unrest. Public sector workers receive a host of benefits that effectively add 50-70% to their take-home wages. They include family allowances and so-called danger pay benefits for security forces.

Still, experts said that won’t be enough if oil prices remain between $20-30 per barrel.

“Cuts need to be deeper to make a dent in payroll, and even then, if revenues are so low there comes a point where cuts are not enough,” Jiyad said .

On top of this, expected compliance with OPEC will require Iraq to cut over 1 million barrels per day from production in May and June.

Moreover, the country has been left without an effective executive to carry out reforms by an ongoing leadership vacuum since December, when Prime Minister Adel Abdul-Mahdi resigned under pressure from protesters. Prime Minister-designate Mustafa Kadhimi is due to present his proposed Cabinet to Parliament next week, but he faces opposition from key political blocs.

Until his government is in place, a 2020 budget is unlikely to be approved. This limits Iraq’s ability to borrow from international agencies for budgetary support.

Across the region, the drop in oil prices will derail future investment and development plans.

The region’s largest crude producer, Saudi Arabia, plans to cuts spending by 5%, or about $13.3 billion. Additional cuts and measures are expected as it digs into its roughly $500 billion in foreign reserves.

Target dates of Crown Prince Mohammed bin Salman’s plan for the completion of new cities and mega projects will likely be delayed as businesses suffer and foreign investment dips amid the pandemic.

Kuwait has ample reserves as well. But the island nation of Bahrain faces a debt estimated to be equal to 105% of its GDP, even after it received a $10 billion bailout from its neighbors to avoid defaulting on a $750 million Islamic bond repayment in 2018.

Other giant global oil producers will have to grapple with job losses and economic shocks.

U.S. producers and service companies have laid off thousands of employees, and greater job losses are expected as the pandemic drags on. Many shale producers were already struggling before the pandemic hit, and some have filed for bankruptcy, with more expected.

The price crash has dealt a blow to Russia at a time of partial economic shutdown. Russian officials say that the nation’s solid hard currency reserves can help sustain the shock and insist low production costs allow Russian oil companies to stay profitable.

The double shock of the pandemic and dropping oil prices is also expected to hit hard in Egypt, Jordan and Lebanon, which rely on a large diaspora and workers in oil-rich Arab Gulf countries who send foreign currency home.

In Lebanon, remittances once made up 12.5% of GDP; in Egypt, they account for 10% of GDP. Coupled with its own economic crisis and financial turmoil, the anticipated losses for Lebanon will be devastating.

“How are we expected to survive from now on? Hunger is knocking at the doors,” a Lebanese man told reporters this week, as he waited in a long line outside a money transfer shop in Beirut, on the last day he would be allowed to collect a wire transfer in dollars from his older brother in Qatar.