Millennials and boomers: Pandemic pain, by the generation 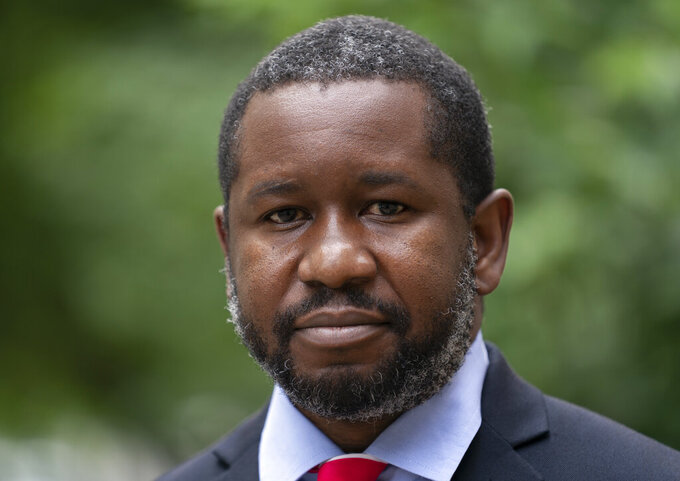 Economist Gbenga Ajilore poses for a photo outside his home in Washington, Friday, June 19, 2020. Ajilore believes the coronavirus pandemic is affecting the two largest U.S. generations, Baby Boomers and Millennials. For baby boomers, named for the post-World War II surge of births, that means those who retired or are nearing retirement age are seeing their retirement accounts appearing unreliable while their health is at high risk. Millennials, who became young adults in this century, are getting socked again as they were still recovering from the Great Recession. (AP Photo/J. Scott Applewhite)

CINCINNATI (AP) — Millennials, you're taking a big hit — again. And you're not OK, either, boomers.

Sometimes at odds, America's two largest generations now have something to agree on: The coronavirus pandemic has smacked many of them at a pivotal time in their lives.

For baby boomers, named for the post-World War II surge of births, that means those who are retired or are nearing retirement are seeing their 401(k) accounts and IRAs looking unreliable while their health is at high risk.

Millennials, who became young adults in this century, are getting socked again just as they were beginning to recover after what a Census researcher found were the Great Recession's hardest hits to jobs and pay.

“The long-lasting effects of the Great Recession on millennials, that was kind of scarring,” said Gray Kimbrough, a millennial and an economist at American University in Washington. “And now when the economy had finally clawed back to where we were before the Great Recession, then this hit at a particularly bad time as well for millennials in particular.”

Another factor: Millennials had been the most diverse generation, and the pandemic has hurt Black people and Latinos disproportionately both in health and financially. “The pandemic has shined a spotlight on massive inequality by race, ethnicity and gender,” said Christian Weller, a professor of public policy at the University of Massachusetts-Boston.

This year has highlighted America's generation gaps, especially between the two largest generations. Both have been stereotyped as being self-absorbed — millennials as selfie-obsessed avocado toast addicts, boomers for their oversized “mcmansions” and self-indulgence. And both are feeling pandemic pain, though in different ways.

“When the generations divide, youth will know only youth; the aged will know only the aged,” Landon Jones wrote in “Great Expectations: America & the Baby Boom Generation,” his 1980 book that coined the term boomer. “And as always, the boom generation will know only itself.”

The boomers were mostly born to “the Greatest Generation,” Americans who survived the Great Depression as children and rallied together to win World War II. But while birth rates slowed down during the ensuing “Generation X,” the millennial generation expanded, fueled in part by immigration.

Millennials became the best-educated generation and more open to social change, only to find that the boomers' helped elect Republican Donald Trump president by outvoting them in 2016.

The virus has killed older Americans more than others. It left many isolated at home for safety — and with a sense they are considered expendable in efforts to reopen the economy.

“We've become a throwaway generation," said Norm Wernet, 74, an advocate for retiree causes in Ohio. “It infuriates us.”

It's upsetting to see so many younger people going maskless around older people, Wernet said, even as federal disease experts say wearing masks helps protect vulnerable people. Boomers, he said, aren't getting to enjoy the golden years they worked decades to reach.

Meanwhile, a string of newspaper and magazine stories have dubbed millennials “the unluckiest generation.”

Richard Fry, a senior researcher for the Washington-based Pew Research Center, says early studies of pandemic attitudes have shown that older people see it more as a health crisis, while young adults worry more about economic impact. But researchers are finding older Americans have been hit harder by job loss, too, in this recession.

Having lunch together on a restaurant deck in suburban Cincinnati, a father and son recently discussed differences in generational views of 2020.

“I've had friends that have been laid off. I've been partially furloughed along the way. I'm not accustomed to that,” said Chris Newsome, 36, a millennial who went to college under the G.I. Bill after serving two tours of Army duty in Iraq and one in Afghanistan. That helped his finances through the Great Recession, but he's “certainly feeling the sting” of this downturn.

“We haven't seen something exactly like this before," Newsome said. “We don't really know what we're walking into. ... It's complicated everybody's personal and professional lives.”

Newsome, who works in job placement, said some businesses he worked with stopped hiring or shut down. His family and peers had to suddenly work from home, leaving many to manage day care and schooling. Gbenga Ajilore, a senior economist at the Center for American Progress, said the pandemic has forced one parent in some two-income families to drop out of the work force.

Chris' father, Buck Newsome, 64, president of Cambridge Financial Group, said he felt the Great Recession was “more visceral for me and my peers."

Many boomers were in peak earning years, “sailing along” toward retirement, when underlying problems with the economy highlighted by the housing bubble finally popped. But the current recession was self-inflicted, caused by shutdowns and quarantines for public health, he said.

He thinks the underpinnings remain to get the economy moving again, though that's clouded by uncertainty. Newsome hears from many peers who got so "clobbered” in 2008 and 2009 that they have sold off.

U.S. Sen. Rob Portman, R-Ohio, 64, had been raising alarms about insufficient retirement savings among older Americans before the current downturn. He and Sen. Ben Cardin, D-Maryland, have pushed legislation aimed at the one-fifth of Americans nearing retirement who have little or no savings.

“A lot of people are low in terms of retirement savings, particularly baby boomers,” Portman said, with recent pay cuts and layoffs aggravating that. Congress' first COVID-19 relief package allowed people to withdraw money from their 401(k) ’s without the usual penalties, but that has further drained retirement savings.

Brian Bascom, 30, said fellow millennials — already dealing with a sluggish economy — weren’t positioned to weather job loss or furloughs. Many are carrying college debt; some had been wary about the stock market after seeing parents’ and grandparents’ savings hammered during the Great Recession.

“This may have shaped their ideals and perspectives about the investing marketplace,” said Bascom, a financial adviser with Morgan Stanley in Cincinnati. He said it's important for his generation to trim unnecessary expenses — cutting Starbucks runs, frequent restaurant dinners or that extra streaming service.

Adding to uncertainty have been the widespread protests sparked by deaths of Black men and women at the hands of police. Ajilore sees “the same line of unequal treatment” running through the nation's COVID-19 response. “These protests may actually benefit and give an impetus to create a more inclusive recovery,” Ajilore said.

“We're a resilient country, and right now we're pretty divided,” said Buck Newsome, boomer. “But if history is any indication, we'll somehow pull this together."

He added, laughing: “I hope I’ll be around to see it.”