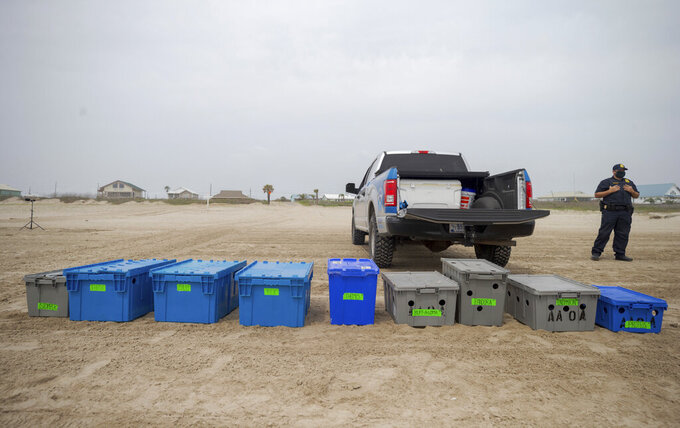 GRAND ISLE, La. (AP) — A small parade of rescued young sea turtles has headed into the Gulf of Mexico from Louisiana — a bright note in a tough season for sea turtles.

The 13 released Monday at Grand Isle were among more than 1,100 cold-stunned starting in the fall in New England, where experts say climate change is contributing to such events. Many thousands were cold-stunned off of Texas in February by the winter storm that killed at least 20 people from Texas to the East Coast.

Once the cardboard boxes holding them were put down on the beach, the dinner plate-sized turtles began scraping at the sides and poking their noses out of the holes, The Times -Picayune / The New Orleans Advocate reported. Their front flippers churned wildly as they were picked up.

“They’re like, ‘Let me back in!’” said Gabriella Harlamert, sea turtle stranding, rescue and rehab coordinator at the Audubon Nature Institute.

Sea turtles get cold-stunned and lethargic when the water around them chills down so fast they can’t swim to warmer waters. The cold alone can kill them. It can also lead to pneumonia, shock and frostbite.

Those released this week at Grand Isle were Kemp's ridley sea turtles, like most of those injured in New England, where volunteers rescued 775 turtles, said Kate Sampson, regional sea turtle stranding coordinator for the National Oceanic and Atmospheric Administration. Kemp's ridley are the smallest and most endangered sea turtles — and all six species found in U.S. waters are protected under the Endangered Species Act.

Sampson said she didn't have survival figures, but typically about 80% of the turtles cold-stunned off New England that are sent for rehabilitation survive.

“These animals are really sick when they come in,” she said — they've eaten little if anything for as much as a month and their immune systems are in bad shape.

The Texas turtles were likely in relatively good shape because the cold came on so quickly, she said.

In the 1990s, about 100 or fewer cold-stunned sea turtles were found every year off New England, but the average is now more than 600, Sampson said. She said that's partly because more Kemp's ridley are hatching, but also because the Gulf of Maine is warming faster than any other water body, and that warmth is drawing in more and more juvenile turtles.

“What seems to happen is when the water temperature starts to go down they start heading south and run into Cape Cod," Sampson said. That hook of land and nearby currents trap the turtles, which would have to go against their instincts and swim north to get around it, she said.

Louisiana's 13 were among a group of 30 brought to the Audubon Nature Institute after a rough ride from Cape Cod.

“All the days and nights over the last four months caring for these turtles have all been for this,” Harlamert said in a news release Wednesday. “Getting to return them to the wild is why we do what we do, and it’s the best feeling ever.”

So many green and Kemp's ridley sea turtles were found off Texas in February that the South Padre Island Convention Center was used as an emergency sea turtle hospital. More than 10,600 had been found as of Feb. 24; officials could not be immediately reached Wednesday for an update.