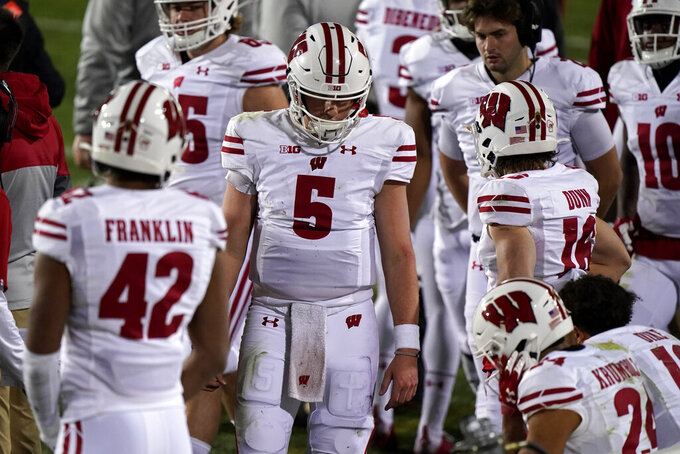 Wisconsin quarterback Graham Mertz (5) looks down at the bench during the second half of an NCAA college football game against Northwestern in Evanston, Ill., Saturday, Nov. 21, 2020. Northwestern won 17-7. (AP Photo/Nam Y. Huh) 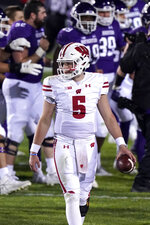 No. 18 Wisconsin believes it still has plenty of incentive even though it no longer controls its destiny in the Big Ten title race.

It helps that the Badgers (2-1) are following up their loss to Northwestern with a rivalry matchup against Minnesota (2-3). This will mark the 130th meeting between the teams, making it the Football Bowl Subdivision’s most played series.

“Both teams want to win this game more than probably any other game of the year,” Wisconsin running back Garrett Groshek said.

Minnesota is dealing with pandemic-related issues as it gears up for this game. School officials announced Monday night the team won’t practice Tuesday and will conduct all meetings virtually as a result of presumptive COVID-19 positive tests.

The Wisconsin-Minnesota rivalry resonates with Badgers quarterback Graham Mertz. His father, Ron Mertz, was an offensive lineman for Minnesota from 1989-92.

“I’m like, ‘Dad, we’ve got your boys this week,’ and he was like, ‘Easy with that, you’re my boy now,’” Mertz said. “It’s definitely funny. I don’t know what he’s thinking, but I know he likes the Badgers right now. He’s a fan of wherever the Mertzes are playing.”

Last year’s Wisconsin-Minnesota matchup had more than Paul Bunyan’s Axe at stake. Wisconsin clinched a Big Ten championship game appearance by winning 38-17 at Minnesota, beating the Golden Gophers for the 15th time in its last 16 attempts.

Wisconsin entered this season with even higher expectations. The Badgers’ lopsided victories over Illinois and Michigan put them in position to challenge No. 3 Ohio State (4-0) for the Big Ten title.

Now the Badgers likely won’t even get to face Ohio State this year. Northwestern (5-0) took command of the West Division by forcing five turnovers in a 17-7 victory.

The result moved Northwestern from 19th to 11th in the AP Top 25 while Wisconsin fell from 10th to 18th.

Wisconsin still could capture the West title if it wins its final three games and Northwestern loses twice. The Wildcats play Saturday at Michigan State (1-3), Dec. 5 at Minnesota and Dec. 12 against Illinois (2-3).

The Badgers follow up their game with Minnesota by hosting No. 12 Indiana (4-1) and visiting Iowa (3-2).

“We might not always control our own destiny, but we absolutely get to control what happens next,” Groshek said. “And that’s the mindset that we’ve had just being able to move forward. There’s still a lot of things and a lot of games left to be played.

Wisconsin’s players point out that they’ve faced adversity off the field all season long.

They spent much of the summer wondering if they’d even have a football season amid the coronavirus pandemic. They went through a COVID-19 outbreak that caused them to cancel scheduled games with Nebraska and Purdue.

Given those circumstances, they feel ready to deal with obstacles that are at least football-related, particularly with a rival coming to town. Defensive end Isaiahh Loudermilk says he noticed the difference Monday morning.

“It feels good getting into a game like this,” Loudermilk said. “The season’s been different. Everything’s felt different. Coming into the stadium this morning, we kid of got our traditional ‘Axe Week’ things going on in the locker room, some stuff up on some of the video boards. It kind of makes it feel a little bit more normal, a little bit more like last year.”

Now Minnesota is dealing with its own pandemic-related issues. Minnesota officials said Monday night the team's goal is to return in preparation for Saturday’s game at Wisconsin.