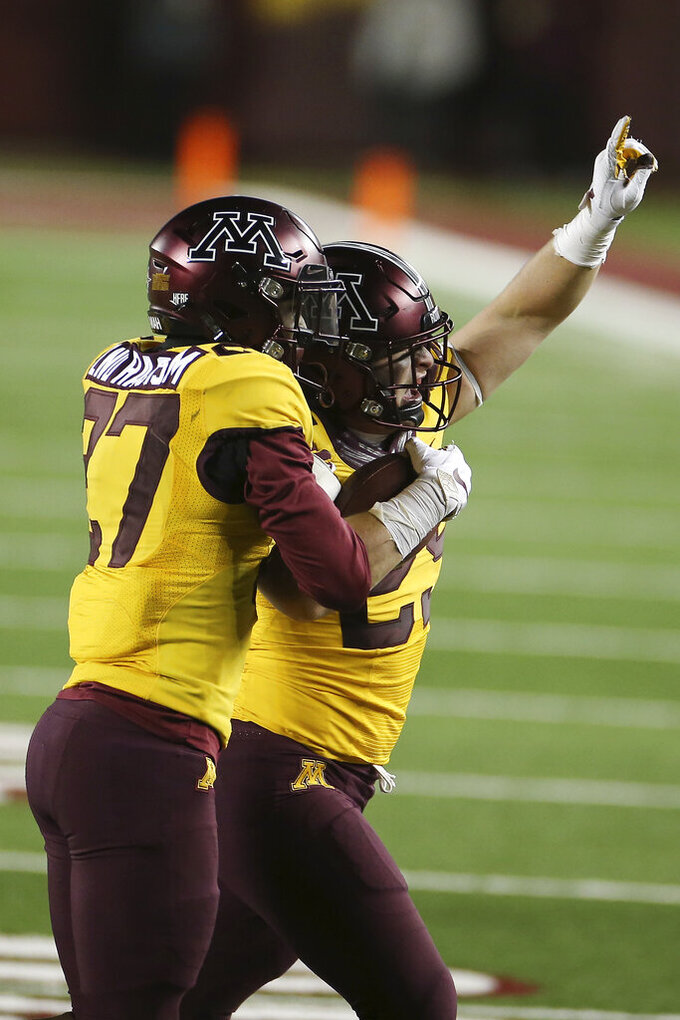 Minnesota linebacker Josh Aune (29) holds the ball and celebrates with defensive back Tyler Nubin (27) after Aune intercepted a Purdue pass during the second half of an NCAA college football game Friday, Nov. 20, 2020, in Minneapolis. Minnesota won 34-31. (AP Photo/Stacy Bengs)

Minnesota and Wisconsin will try again to keep their rivalry streak alive, and Indiana and Purdue now have another chance to resume their series as well.

The Big Ten on Sunday announced the undercard to Saturday's conference title game between No. 3 Ohio State and No. 15 Northwestern. Dubbed “Champions Week” by the league, the plan was to give every team in the conference a chance to play an extra game after the end of the regular season. That means high-profile cancellations like Minnesota-Wisconsin and Indiana-Purdue can now be made up.

Wisconsin is set to host Minnesota on Saturday, and No. 7 Indiana hosts Purdue on Friday night. Rutgers hosts Nebraska in Friday's other game. The rest of the Saturday slate includes Illinois at Penn State, Michigan at No. 18 Iowa and Michigan State at Maryland.

Minnesota and Wisconsin were supposed to play Nov. 28, but the game was canceled because of elevated COVID-19 cases in the Minnesota program. If Saturday's game takes place, it will be the 130th meeting between the teams. They've played every year since 1907, making this the longest-running uninterrupted series in FBS history.

“This game means a tremendous amount to the student-athletes, coaches and fans of both schools," Minnesota coach P.J. Fleck said. "We are excited to play and extend this rivalry, as Saturday’s game will be the 130th meeting. In a year of constant change, we appreciate the Big Ten, both administrations and each conference member institution for preserving this rivalry.”

Indiana will try again to play in-state rival Purdue for the Old Oaken Bucket. Their Dec. 12 game was called off because of COVID-19 issues.

The Michigan State-Maryland game is also a rescheduling of a matchup that was supposed to take place Nov. 21.