Mississippi Mayor: ANTIFA not coming, COVID-19 not a hoax 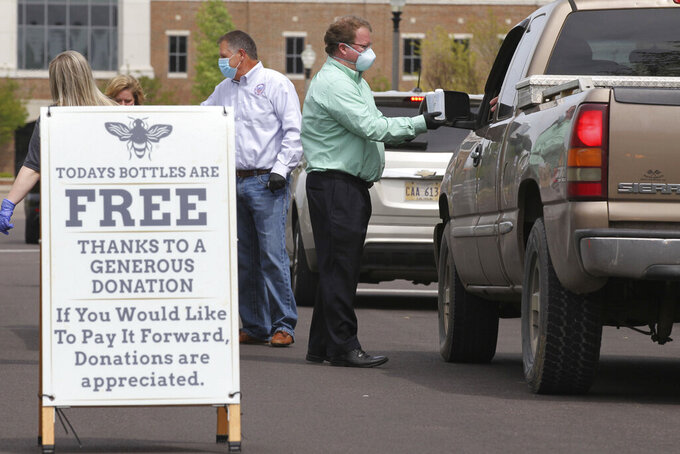 TUPELO, Miss. (AP) — In the Mississippi city where Elvis Presley was born, the mayor announced last week that masks would be required in public buildings and businesses starting Monday because of the COVID-19 pandemic — and he used the opportunity to debunk an array of rumors.

“Please listen to our health care professionals regarding covid-19. My job as mayor is do to my best to keep our community safe, not make easy or politically popular decisions," Tupelo Mayor Jason Shelton wrote on Facebook.

He added: "ANTIFA is not coming to Tupelo, Elvis statues are not being removed, you are not the target of some type of global conspiracy, it is impossible to erase history and no one has attempted to do so, covid is not a hoax, you shouldn’t believe and share posts that are obviously false or used as political propaganda, and there is nothing ‘liberal’ about any of the actions that have been taken by our administration regarding these matters.”

Shelton, a Democrat who publicly supports presidential nominee Joe Biden, told The Associated Press in a brief phone interview Monday that he was addressing “specific allegations I have received either by phone, email or social media.”

He said people seemed, by and large, to be following the mask requirement, though City Hall was getting complaints about businesses not requiring employees to wear masks.

Responses to his Facebook message on Friday and a follow-up on Monday ranged from praise to: “Your days are numbered.”

The reference to erasing history is because Shelton has pushed for years to remove the Confederate battle emblem from Mississippi’s state flag — something the state Legislature voted on Sunday to do.

Shelton said he signed the mask order at the request of officials at North Mississippi Medical Center, which he described as Mississippi's largest rural hospital, and the Tupelo Economic Recovery Committee — about 40 business and civic leaders appointed to help Tupelo during the pandemic.

Shelton's order said that as of Friday, 429 cases were in Tupelo, where the total was rising an average of 11.7 per day. The hospital had been near or at capacity for COVID-19 patients for two weeks, it said.

For most people, the coronavirus causes mild or moderate symptoms, such as fever and cough that clear up within weeks. But for some, especially older adults and those with existing health problems, it can cause more severe or fatal illness.

The mayor said his Facebook post was written Friday as he was getting ready to leave for the day.

“I thought I'd just address everything at once,” he said. “I just tried to hit the main topics of just the outlandish things that go around the rumor mill."

Those included the Antifa rumors linked to protests against racial injustice and the death of George Floyd, a Black man who died after a white Minneapolis police officer pinned him down and pressed a knee on Floyd's neck.

“I don't know where that kind of stuff comes from," Shelton said. "Personally, I think it's right-wing political propaganda to keep their base stirred up.”