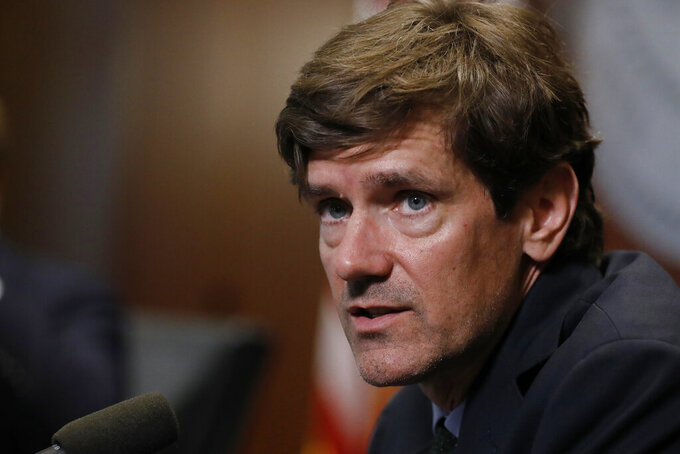 State Health Officer Dr. Thomas Hobbs expresses his gratitude that the Neshoba County Fair and the Choctaw Indian Fair officials understood the seriousness of the current pandemic by canceling their fairs for July, thus lessening the possibility for spreading the virus among the hundreds of people that attend these summer favorite gatherings, during the daily COVID-19 news update in Jackson, Miss., Wednesday, June 10, 2020. (AP Photo/Rogelio V. Solis)

JACKSON, Miss. (AP) — The Mississippi Department of Health announced 1,092 new cases of coronavirus Thursday, the highest numbers seen in the state since the pandemic began.

The highest single-day increase prior to Thursday was reported on Tuesday, when the state notched 611 new cases. State Health Officer Dr. Thomas Dobbs warned Thursday of continuing days of increases if people do not take social distancing and mask-wearing seriously.

“If we’re not careful, Mississippi is going to look like New York at the height of the pandemic,” Dobbs said at a press briefing. “We can stick our head in the sand and try to find excuses so that we don’t have to modify our behaviors, but it doesn't change the truth. The truth is, there’s a lot of COVID out there, it’s killing people, it’s going to kill a lot of people and it’s going to stress out our healthcare system.”

States across the South from Florida to Texas are reporting a spike in cases. The number of new coronavirus cases per day in the U.S. stood near an all-time high Thursday at more than 34,000.

Following the footsteps of officials across the country, Dobbs said the Mississippi officials are open to imposing mask-wearing requirements to temper the virus. Tupelo Mayor Jason Shelton announced an intent to impose new safety orders Thursday, including masking requirements inside the all of city’s businesses, according to the Daily Journal. Two major casinos in Biloxi, Beau Rivage and Harrah's, announced Thursday that they will require patrons to wear masks.

Mississippi — with a population of about 3 million — has had at least 24,516 cases and 1,016 deaths from the coronavirus as of Wednesday evening, according to the state Department of Health. The Health Department said at least 2,487 cases of the virus have been confirmed in long-term care facilities such as nursing homes, with at least 503 virus-related deaths in those facilities.

Dobbs said he doesn't think the new cases were were caused by the state opening back up too quickly. The real problem is a lack of concern for safety guidelines, the health officer said.

State Epidemiologist Paul Byers said many of the new cases stem from community transmission of the virus from younger, asymptomatic people to their older relatives after attending social gatherings.

“There have been lots of parties where 300-plus people are getting together and they’re close and they’re drinking. ...We can’t act surprised that we’re seeing these types of increases in cases," Byers said at Thursday’s press briefing.

Dobbs said the recent increases feel like a slap in the face after weeks of forward momentum. Officials were just considering starting to lift restriction on nursing home visitations, and now they need to start discussing implementing more restrictions, Dobbs said.

“This is screwing it up," he said. "It is so selfish for people to be out doing stuff, perpetuating this pandemic for nothing more than the crawfish boil.”

For now, the best thing people can do to protect themselves and others is to avoid large groups, wear masks and be cautious, Byers said.

“We need to start with a vengeance," Byers said. "Once things start going, it's like trying turning around the Titanic.”

Gov. Tate Reeves took to Twitter on Thursday to back up Dobbs, and warn people that the coronavirus is not gone just because they “give up.”

“Please listen. We’ve been beating this drum for months. Dr. Dobbs is graphic in his warnings to us about where this heads,” he wrote. “If people just follow current orders and aren’t reckless, we can beat this.”