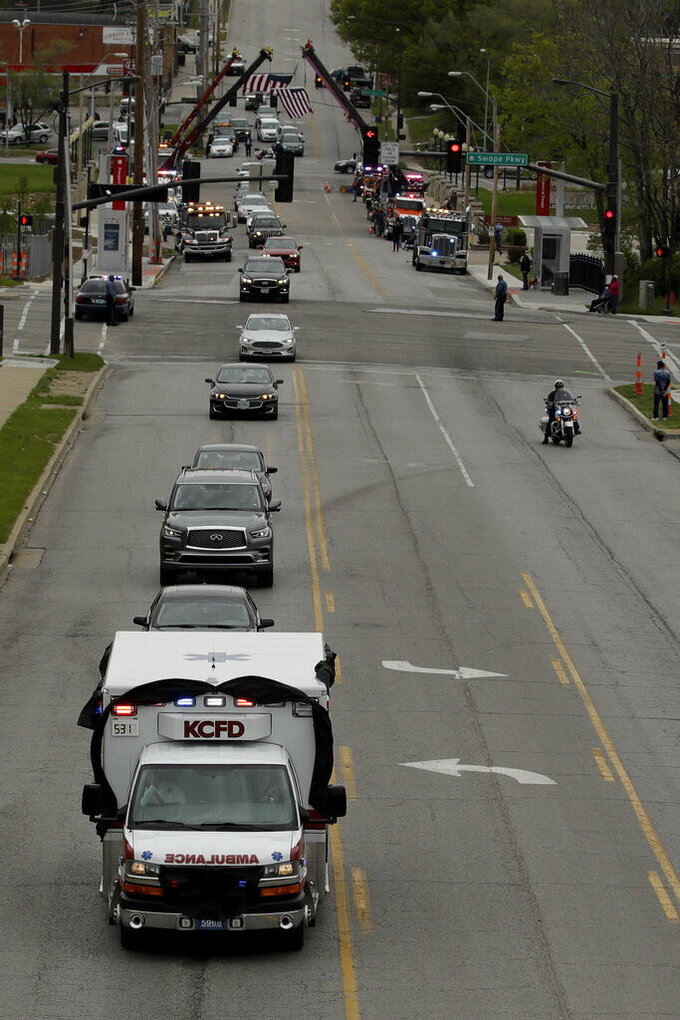 A funeral procession for Kansas City Fire Department EMT Billy Birmingham makes its way to the cemetery in Kansas City, Mo., Wednesday, April 22, 2020. Birmingham, who died after contracting COVID-19, was the first line-of-duty death among first responders in the state. (AP Photo/Charlie Riedel) 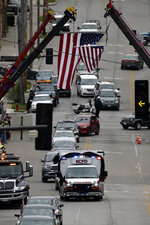 Saline County on Wednesday reported 96 cases of COVID-19, the illness caused by the coronavirus. Moniteau County reported 55 cases, citing 29 as confirmed and 26 as “probable.” Neither county has reported a death.

Statewide, the number of confirmed cases topped 6,000 on Wednesday. Johns Hopkins University’s Center for Systems Science and Engineering, which is monitoring cases worldwide, shows 6,210 cases in Missouri, up 247 from Tuesday. The number of infections is likely higher because many people have not been tested and studies suggest people can be infected and not feel sick. The number of deaths rose by 14 to 229.

Saline and Moniteau counties are home to food and meatpacking plants, facilities where people next to each other on production lines. Across the Midwest, several packing plants have seen similar outbreaks, prompting the temporary closure of a Tyson Foods facility in Waterloo, Iowa, a Smithfield Foods plant in Sioux Falls, South Dakota, and a JBS USA plant in Worthington, Minnesota.

Williams said rural outbreaks are concerning because patients in those areas tend to be older and have more chronic health diseases.

Burgers Smokehouse, a smoked and cured meat manufacturer in the Moniteau, Missouri, town of California, is closed. Twenty-one employees tested positive for the coronavirus, said Darrell Hendrickson, Moniteau County’s environmental specialist. He said “the majority” of COVID-19 cases in the county of 16,100 residents are connected to those workers, including relatives and friends. All but one of the 55 cases involve people age 59 or younger.

Hendrickson estimated that about 300 people work at the plant. He said Burgers did “everything we asked,” including instituting social distancing requirements “as best they can.”

“That’s the problem with facilities of this type,” Hendrickson said. "They have distanced as much as possible, but I can’t guarantee they get 6 feet between all employees.”

Cargill Inc. also operates a plant in Moniteau County, but no employees there have contracted the virus, Hendrickson said.

In Saline County, home to about 23,000 residents, both Conagra and Cargill operate facilities in the town of Marshall. Conagra spokesman Dan Hare said 42 of the 700 employees in Marshall have been diagnosed with COVID-19. Workers at the plant make frozen meals. The plant has been closed since April 17.

Hare said the plant is expected to reopen Monday. He said that when it does, Conagra will continue with measures such as social distancing, temperature screening and increased sanitizing.

Cargill spokesman Daniel Sullivan confirmed that employees at the Saline County plant have contracted the coronavirus, but declined to say how many. Sullivan said Cargill has taken extra steps to make sure meatpacking plant workers are safe, including providing masks, temperature checks and enhanced cleaning and sanitizing of equipment.

Saline County Health Department Administrator Tara Brewer believes the high per capita rate in Saline County is due partly to aggressive testing. The county offers drive-up testing 24 hours a day and about 800 people have been tested, she said.