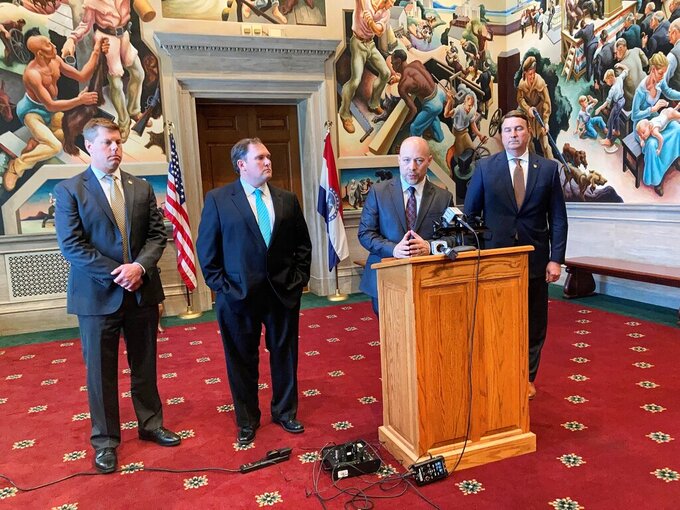 Missouri House Budget Committee Chairman Cody Smith speaks to reporters Friday, May 7, 2021, at the Missouri Capitol in Jefferson City, Mo., after the Republican-led House approved a $35 billion budget. The fiscal 2022 spending plan that Smith helped shape does not include funding for a Medicaid expansion approved by voters. (AP Photo/David A. Lieb)

JEFFERSON CITY, Mo. (AP) — Missouri lawmakers approved a $35 billion budget on Friday that includes no funding for a Medicaid expansion approved by voters, putting Gov. Mike Parson's administration in a position to decide what to do next about the health care program for low-income residents.

The fiscal 2022 spending plan passed by the House and Senate includes funding increases for public schools, universities, hospitals and nursing homes, as well as a pay raise for state employees. It passed just hours ahead of a constitutional deadline.

Although Republicans noted that the budget increases funding for the current Medicaid program, they made clear that they didn't intend any of the money to be used to expand coverage for low-income adults under the terms of a constitutional amendment approved by voters last fall.

That measure says people ages 19-65 earning up to 138% of the federal poverty level — less than $17,774 annually for an individual or less than $37,570 for a family of four — “shall be eligible” and “shall receive coverage” for Medicaid benefits starting July 1. The amendment did not change existing eligibility standards for children and seniors, and it did not say how to pay for the expansion that is projected to cover a couple hundred thousand people.

Republican lawmakers believe that by not appropriating money for the expanded coverage, they can prevent it from occurring.

“There is not a need to enroll that population if there is no money to provide a benefit to them,” said House Budget Committee Chairman Cody Smith, a Republican from Carthage.

But Democrats contend that the state must cover the additional people anyway, even if it means there would be less money available for everyone else in the program.

It will be up to Parson's administration to decide how to implement the budget, though any decision is likely to face a court challenge. The Republican governor opposed the Medicaid expansion at the ballot box, but after voters approved it, he included funding for it in the budget he proposed to lawmakers earlier this year.

“We will assess our options and legal requirements on how to move forward regarding Medicaid expansion,” Parson spokeswoman Kelli Jones said Friday.

Although some Republicans said the state cannot afford the long-term costs of expanding Medicaid, Democrats noted that the state is flush with cash from federal coronavirus relief laws and would get even more federal money if it expanded Medicaid eligibility under the terms of a health care law signed by then-President Barack Obama in 2010.

Rep. Peter Merideth, the ranking Democrat on the House Budget Committee, said Republicans were “stubbornly attached to ideology and opposition to an old president” and were disregarding the will of the people.

“The state GOP Legislature essentially just gave them the finger today, and they gave their middle finger to the constitution that they supposedly swore an oath to uphold,” said Merideth, of St. Louis.

Aside from the Medicaid dispute, Democrats and Republicans agreed on several aspects of the budget. The spending bills provide the full amount called for by the state's K-12 school funding formula and increase aid to public universities by 3.7%. State employees would get a 2% pay raise.

The budget increases payments to nursing homes, hospitals, those providing services to the developmentally disabled and those participating in the foster care and adoption systems. The state's public defender system, which provides legal aid to low-income people charged with crimes, also would get additional money.

The budget includes $48 million to spare Missourians who mistakenly received unemployment benefits during the COVID-19 pandemic from having to repay the money.