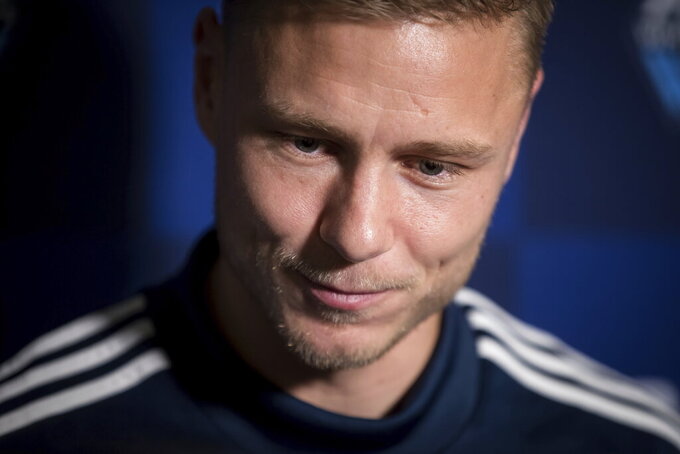 FILE - In this Jan. 21, 2019, file photo, Vancouver Whitecaps midfielder Andy Rose pauses while responding to questions during a media availability ahead of the MLS soccer team's training camp, in Vancouver, British Columbia. When the MLS Is Back tournament starts next week in Florida, the vast majority of the league’s players will be taking part. For some, that includes balancing their own personal underlying health concerns with the opportunity to return to their profession. That includes the likes of Vancouver's Andy Rose and Seattle's Jordan Morris, who both have Type 1 diabetes. (Darryl Dyck/The Canadian Press via AP, File) 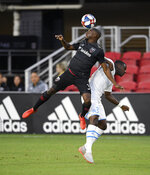 SEATTLE (AP) — Vancouver Whitecaps midfielder Andy Rose needed to have a lot of conversations and make hard decisions when Major League Soccer first started moving toward returning to action with a tournament in Florida.

There were concerns about potentially exposing his young son and pregnant wife to the coronavirus. And as someone living with Type 1 diabetes, significant concerns about his own personal health.

“You’re trying to not read too much. There’s so much information out there,” Rose said. “I checked in with my endocrinologist a couple weeks ago, we had a conversation. And then obviously going through this process of going to Orlando while my wife is pregnant. I’ve been in constant communication with our team doctor and he’s been amazing in terms of giving me updates.”

The majority of the league’s players will be taking part when the tournament starts next week. For some like Rose, that will include balancing underlying health concerns with the opportunity to return to the field.

Rose had to decide whether to even play in Florida and, if so, how best to protect himself knowing diabetics have a higher risk of complications if they contract the coronavirus. That meant a lot of talks with doctors, his endocrinologist and infectious disease experts.

“Having all those conversation, given my health, given how seriously I take managing my diabetes on a daily basis, I came to the conclusion fairly early on even before Orlando was a go — this was still during negotiations -- that I would feel safe going,” Rose said.

MLS has said players can opt out of the tournament for various reasons.

Players who are deemed high risk have to be cleared by their primary care provider to participate. Some of those high-risk conditions include moderate to severe asthma, heart conditions, diabetes and being immunocompromised.

The caution has been warranted as six players for FC Dallas tested positive for COVID-19 upon arrival in Florida and the entire team was quarantined. Toronto FC and Nashville SC delayed travel to the tournament while awaiting test results.

There's also the rising cases across the Orlando area.

“For everyone in the “These are pro athletes. There is no risk. Nothing happens to them if they get the virus” camp - I am high risk. And I know for a fact there are multiple others at #MLSisBack that are as well - including other players on their way here. This is serious,” Lampson wrote.

Lampson is among a handful of MLS players whose past health issues or underlying conditions are publicly known. Rose and Seattle’s Jordan Morris, who both have Type 1 diabetes, are among the most prominent, partly because of their philanthropic efforts to help those with similar conditions.

In Odoi-Atsem’s case, the little time he’s had to play over the past couple of seasons made the Florida decision fairly easy.

“For me, my past health condition made me want to go down there even a little bit more,” Odoi-Atsem said. “I’ve missed a lot of time in my pro career due to my cancer and even injuries and things like that. This is a point in my career where I’m fully fit, fully healthy and a chance to play in real, official games in the league is what I’m really concerned about. I’m really excited to get back to playing.”

Among the many conversations Morris had in making his decision to play was one with his father, Dr. Michael Morris, who is also Seattle’s team physician.

“I think when this all started I tried to understand exactly what it would mean if potentially I did get COVID and with the underlying condition of diabetes because it is mentioned as one where you could have a few more issues,” Morris said. “And so just understanding that, knowing kind of the risks. And for me, I feel like with all the precautions that are put in place and talking to my dad, to the training staff in Seattle and understanding really what the tournament was going to be like and how they were going to run things, I feel really comfortable that I’m going into an environment where things will be handled very seriously.”

Rose was diagnosed with Type 1 diabetes in 2016 while playing for Coventry City in England and one of the first people he reached out to was Morris. Rose played for the Sounders from 2012-15 and knew the Morris family well, even if the two players never teamed together in Seattle.

Not surprisingly, the pair made sure to connect recently and talk through their concerns about returning to play.

“I really enjoy talking to him and kind of bouncing ideas off each other,” Morris said. “We talked about how we felt going to Orlando and both of us said we both felt comfortable. It didn’t really cross our minds that we would stay home.”