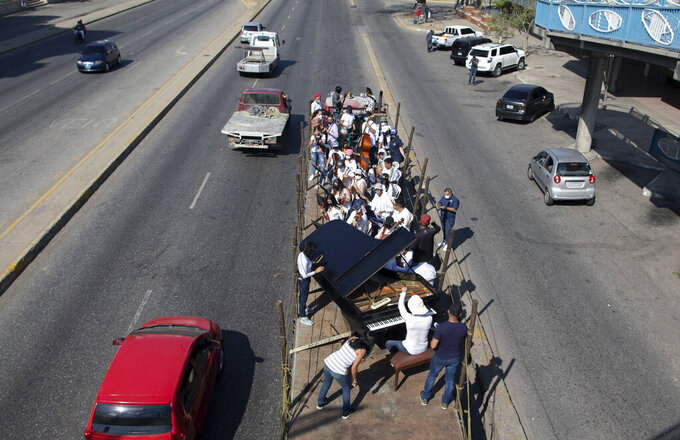 Musicians join pianist, composer and conductor Jose Agustin Sanchez on the bed of an 18-wheeler truck for a musical tour coined a "musical disinfection" in Barquisimeto, Venezuela, Thursday, March 4, 2021. Sanchez, who last year started playing what he calls his "Musical Vaccine" for COVID patients, is now joined by other musicians as they ride through the city playing his original compositions for anybody that wants to listen. (AP Photo/Ariana Cubillos)

BARQUISIMETO, Venezuela (AP) — Orchestra music envelops the streets of a Venezuelan city every time a truck carrying musicians has made its way through traffic for the past year, capturing the attention of drivers and passers-by who take photos and stare at the vehicle. The live performance is an effort to give people some small respite from the coronavirus pandemic and other hardships.

One hot afternoon this week, the musicians climbed on the truck’s platform, and wearing facemasks, began to play as they traveled around Barquisimeto, a city west of the capital, Caracas. Their instruments included a cello, violins and even a Steinway & Sons grand piano.

“Music beyond entertaining us, it can transform us, it can heal, it can alleviate emotions,” said José Agustín Sánchez, a Venezuelan pianist, composer and conductor who came up with the initiative.

Before the show began, Sanchez reminded the musicians that their upcoming performance was a “musical disinfection” that might provoke in them and their audience a range of emotions. He told them to be ready to get yelled at but also to see someone clap and cry.

The tour began outside a school of medicine next to a hospital. Sanchez conducted the mobile orchestra from his piano as the musicians sweated under the midday sun. The orchestra performed for hours many of his melodies, which he wrote while serving as resident composer of the Caracas Municipal Symphony Orchestra.

Venezuela has seen more than 140,900 confirmed infections and 1,364 deaths from COVID-19. Experts believe the small number of cases compared to other countries in the region, such as Brazil, Colombia and Peru, is largely due to the isolation that Venezuela has been experiencing for years because of a political, economic and social crisis.

Barquisimeto is also known as the “musical city” of Venezuela for being the hometown of several of the country’s manufacturers of musical instruments, musicians and composers, including Gustavo Dudamel, the music and artistic director of the Los Angeles Philharmonic in the United States and considered one of the great conductors of today.

Sanchez, 31, returned to Venezuela in 2017, after almost 11 years abroad. His travels took him to Tibet and Nepal, where after several months of “exploring peace from sound,” he decided to return to his afflicted country to deliver a message of unity.

He has been touring Venezuela during the pandemic, playing from the back of pickup trucks but also in medical facilities where patients with COVID-19 are being treated. His Instagram account includes videos of Sanchez wearing personal protective equipment from head to toe and playing the piano next to patients and health care workers.