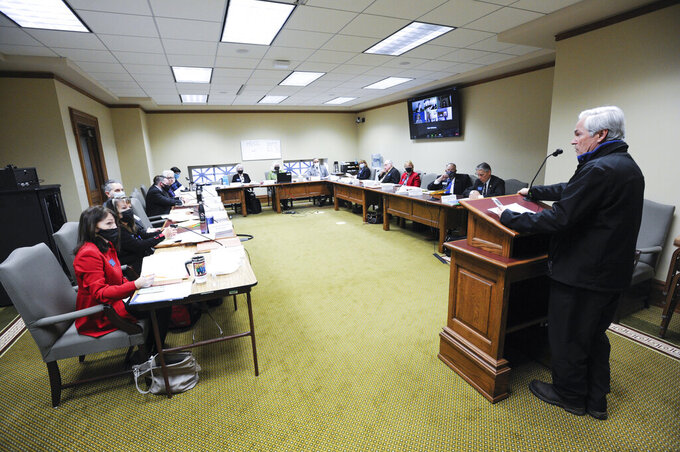 HELENA, Mont. (AP) — A Montana House committee on Tuesday debated a bill to limit the governor's power to issue orders during declared disasters lasting longer than two months and shift that authority to state lawmakers during emergencies like the coronavirus pandemic.

The measure comes in response to former Gov. Steve Bullock's COVID-19 emergency declaration, which was issued in March and is still in place.

The declaration gave the Democrat the ability to issue statewide mandates, including a mask requirement, and allocate coronavirus relief funds without input from the Republican-controlled Legislature. GOP legislative leaders criticized the governor for failing to take their views into account early in the pandemic.

Montana joins at least 17 other states considering enacting limits on executive powers, according to the National Conference of State Legislatures.

Montana law gives the governor the power during declared emergencies to issue executive orders and spend federal emergency funds without approval from the state Legislature, which meets every other year.

Under the proposal, legislative approval would be required if a governor wants to extend a state of disaster beyond 60 days.

The office of Gov. Greg Gianforte, a Republican, did not immediately respond to an email seeking comment.

He said the bill would give powers that should already belong to the Legislature.

“I believe it was a mistake for us to cede that much power,” Bedey said. “At the time the decision was made, most people imagined emergencies to be short duration things.”

“We’re going to see perhaps more and more often the opportunity for us to have to deal with crises. Our citizens demand that we, as a separate and equal branch of our government, exercise some authority during those times,” Bedey added.

“The reason that executive authority for a state of emergency exists is to allow for our state to be nimble and address emergencies in an urgent way,” Abbott said, adding that the Legislature already can call a special session if needed.

Bedey also is sponsoring a bill that would limit the power of local health boards to enact rules to limit the spread of communicable diseases, including COVID-19.

The measure, scheduled for a hearing Thursday, was drafted in response to what some Republican lawmakers said was overreach by local health boards during the pandemic.