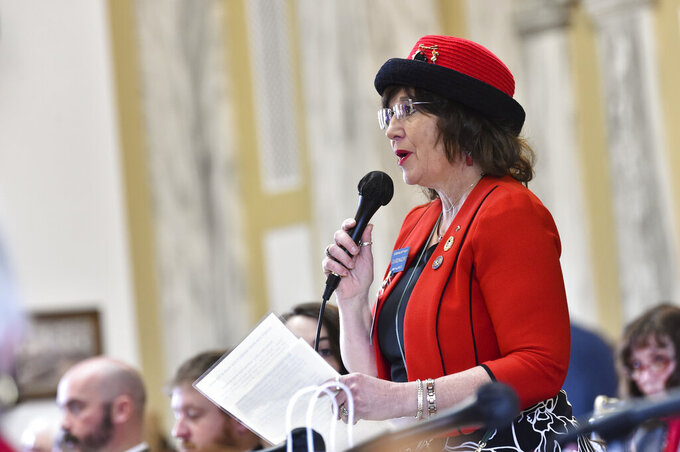 HELENA, Mont. (AP) — The Montana House on Monday advanced four bills that would limit abortion access in the state, capitalizing on the election of a Republican governor for the first time in 16 years.

Three of the bills are repeats of similar bills vetoed last session by former Gov. Steve Bullock, a Democrat. Current Republican Gov. Greg Gianforte has promised to “defend life,” giving anti-abortion lawmakers and activists hope that the bills will be signed into law.

The bills largely echo legislation already passed in other Republican-controlled states — including a ban on abortion in most cases after 20 weeks of gestation; a requirement that health care providers give pregnant women the opportunity to view an ultrasound before performing an abortion; and a requirement that abortion pills be administered in-person rather than through telehealth.

The final bill would ask voters to approve a requirement to care for babies born alive during abortion procedures.

The Republican-dominated Montana House advanced all four bills in 67-33 votes largely along party lines. The bills still must pass a third and final vote in the House before proceeding for consideration in the Senate.

The votes came after the administration of President Joe Biden released a statement last week saying he would seek to codify the Supreme Court's Roe v. Wade decision — establishing a nationwide right to abortion into federal law to protect it from court challenges.

State Rep. Lola Sheldon-Galloway, R-Great Falls, said the ban on abortion after 20 weeks of gestation would protect fetuses that are capable of feeling pain.

But according to the American College of Obstetricians and Gynecologists, fetuses are incapable of feeling pain until 24 weeks of gestation.

Proponents of the rules limiting where and how abortion pills can be administered said the pills can cause medical complications that require medical supervision.

But according to the Kaiser Family Foundation, abortion pills successfully terminate pregnancies in over 99% of cases.

House Majority Leader Sue Vinton, R-Billings, said the bills are not focused on limiting abortion, but rather on protecting human life.

“If a health care provider is required to provide... life saving measures to an infant who is born regardless of the circumstance, then what are we afraid of?” Vinton said.

A coalition of reproductive health activists said after the House votes that the bills would disproportionately harm low income families and people of color in the state, including Native Americans.

Cambria McDermott, a Bozeman resident, said she decided to have an abortion at the age of 26 when she became pregnant while applying to graduate school to become a nurse practitioner.

“My choice was between pursuing a promising career and raising a child in poverty,” she said. “I want my elected officials to know that I am going to be a more productive member of society because I had an abortion."

Caitlin Borgmann, executive director of the American Civil Liberties Union of Montana, said the bills represent a step toward a long-term goal to make abortion completely unavailable in Montana.

“These bills represent the worst kind of government overreach — placing the government between patients and the medical care they deserve,” Borgmann said. “Republicans have plowed ahead despite clear warning that the bills are unconstitutional and will be challenged in court.”

Opponents also criticized Republicans for taking up the contentious issue of abortion early on in the session, as many Montana residents continue to experience the health and economic impacts of the coronavirus pandemic. But House Speaker Wylie Galt, R-Martinsdale, said the bills have not detracted from the Republican majority's efforts toward addressing the fallout from the pandemic.

“A lot of us have been around and we're pretty good at multitasking,” he said.