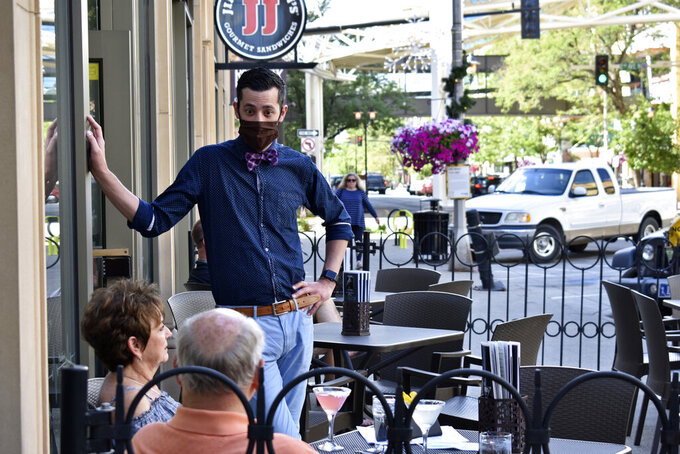 FILE - In this July 17, 2020, file photo, an employee of Doc Harper's Tavern talks with customers while wearing a face mask in Billings, Mont. A bill that would protect businesses and health care providers from coronavirus-related lawsuits is advancing quickly through the Montana Legislature, after the state's Republican governor said the measure was necessary to remove a statewide mask mandate put in place by his Democratic predecessor. (AP Photo/Matthew Brown, File)

HELENA, Mont. (AP) — A bill that would protect businesses and health care providers from coronavirus-related lawsuits is advancing quickly through the Montana Legislature, after the state's Republican governor said the measure was necessary to remove a statewide mask mandate put in place by his Democratic predecessor.

Montana joins at least 20 other states that are considering liability protections against claims related to COVID-19 for businesses, health care providers or educational institutions, according to the National Conference of State Legislatures.

The House Businesses and Labor Committee held a hearing Friday on the bill after the Senate passed the bill in a 37-13 vote earlier this week.

Republican lawmakers, with majorities in both the House and Senate, say the measure is needed to reopen the state’s economy following an economic downturn induced by the pandemic.

Under the bill, businesses cannot be sued by individuals exposed to the coronavirus on their premises, except in cases of “gross negligence” or when businesses intentionally spread the virus. Business owners would not be required to uphold federal or state mask requirements or temperature-check requirements if they remain in place.

“This is not an immunity bill,” said bill sponsor Sen. Steve Fitzpatrick, R-Great Falls. “It's about people who are doing the best they can, and then still getting sued. We want to incentivize people to do the best they can, open their business and get going."

Fitzpatrick said the bill was written with support and guidance from the governor's office.

Gianforte said Friday that he’s encouraged by the progress on the bill, but would have to wait until it landed on his desk to see if it was sufficient to lift the mask requirement.

The governor also said not enough vulnerable residents had been vaccinated to remove mandate, and encouraged Montana residents to continue wearing masks to reduce the spread of the virus. As of Friday, only 14,000 Montana residents — less than 2% of the state's population — had received both doses of the COVID-19 vaccine necessary to achieve immunity.

The liability measure has wide support from industry groups in the state, which say it would allow their businesses to operate more confidently during the pandemic. Opponents of the measure say it would provide blanket protections for businesses and the medical industry from legitimate lawsuits.

Michelle Zizian, a resident of Gardiner, a gateway community to Yellowstone National Park, said the bill could hurt the town's economy by allowing employers in the tourism industry to “sidestep any consequences of putting employees in harm’s way."

As of a week ago, there were 32 lawsuits filed in the state related to COVID-19, but only two would be affected by the legislation, said Al Smith, executive director of the Montana Trial Lawyers Association. Both target long-term care facilities where residents have died from the virus.

“As far as an explosion of lawsuits – it just hasn’t happened in Montana,” he said.