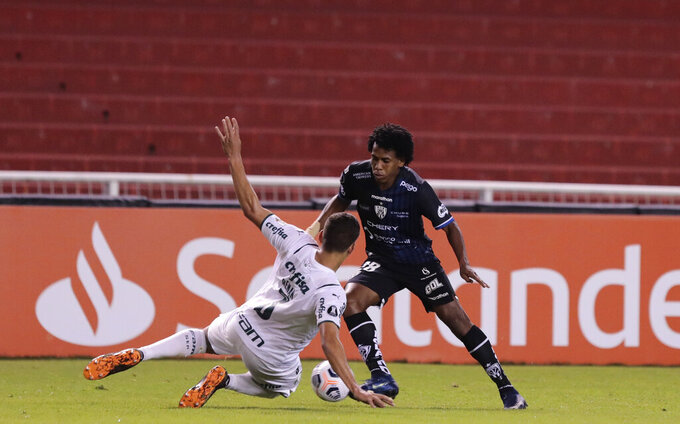 Jose Hurtado of Ecuador's Independiente del Valle, right, and Renan of Brazil's Palmeiras battle for the ball during a Copa Libertadores soccer match in Quito, Ecuador, Tuesday, May 11, 2021. (Franklin Jacome/Pool via AP)

SAO PAULO (AP) — The Centenário stadium in Uruguay's capital Montevideo will host the finals of the Copa Libertadores and the Copa Sudamericana tournaments in November, possibly with fans attending the matches despite the pandemic.

South American soccer body CONMEBOL said Thursday it picked Uruguay as host because of its good record in fighting the coronavirus. The country of about 3.5 million people has seen about 3,200 deaths from COVID-19, among the lowest rates in South America.

“The good health situation projected for November in Uruguay, a country that plans to vaccinate a large percentage of its population in July, was decisive in an exceptional year affected by the pandemic,” CONMEBOL said.

The Centenário stadium will host the Copa Sudamericana final on Nov. 6, and the Copa Libertadores title match on Nov. 20.

“The single-match finals will be a kind of relaunch of the Centenário stadium to mark the South American bid to host the 2030 World Cup,” CONMEBOL said.

The Centenário stadium was built for the first World Cup, which Uruguay hosted in 1930. Uruguay has a joint bid with Argentina, Paraguay and Chile to host the 2030 showcase tournament. CONMEBOL said Uruguayan soccer executives plan to deliver a “radical renovation” of the Centenário in the next few years.