With more border crossers, US groups seek to stem deaths 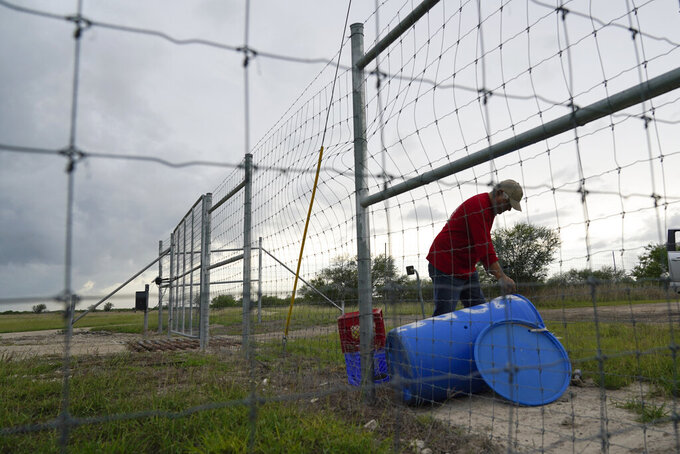 Migrant rights activist Eduardo Canales cleans out a blue water drop Saturday, May 15, 2021, in Falfurrias, Texas. Every week, Canales fills up blue water drums that are spread throughout a vast valley of Texas ranchlands and brush. They are there for migrants who venture into the rough terrain to avoid being caught and sent back to Mexico. (AP Photo/Gregory Bull)

FALFURRIAS, Texas (AP) — Every week, migrant rights activist Eduardo Canales fills up blue water drums that are spread throughout a vast valley of Texas ranchlands and brush. They are there for migrants who venture into the rough terrain to avoid being caught and sent back to Mexico.

The stretch of land 70 miles (113 kilometers) north of the U.S.-Mexico border is dangerous, and many have died. But some migrants — usually single adults — are willing to take the risk, walking through the shrub-invaded grasslands on the sprawling ranches, seeking dirt paths to circumvent a U.S. Border Patrol checkpoint on a major highway where agents verify people’s immigration status.

The Biden administration is dealing with a growing number of single adult migrants crossing the border; they made up nearly two of every three encounters in April. This elusive group is less likely to surrender to U.S. authorities to seek asylum than families and children, often choosing risky routes away from Border Patrol checkpoints and intake sites, where agents process families and children traveling alone.

Of the Border Patrol’s 173,460 total encounters with migrants last month, 108,301 were single adults, with more than half of them Mexican. The numbers were the highest since April 2000, but most were quickly expelled from the country under federal pandemic-related powers invoked last year by then-President Donald Trump and kept in place by President Joe Biden.

Unlike deportations, expulsions carry no legal consequences, and many migrants try crossing multiple times. The Border Patrol says 29% of people expelled in April had been expelled before.

In Brooks County in the Rio Grande Valley, the busiest corridor for illegal crossings, local officials have recovered 40 bodies of migrants in the brush so far this year. In all of 2020, they found 34 bodies, though the coronavirus pandemic vastly reduced the numbers of people coming to the United States.

The Border Patrol keeps its own statistics, which tend to be lower than those tracked by aid groups and local officials because it only counts the remains of migrants it comes across.

Officials this year have found the decomposing body of a Honduran woman with a document identifying her as a fruit packer for the banana company Chiquita as well as a Mexican man who appeared to have worked at a factory. Sometimes, sheriff's deputies only find skeletal remains.

While agents try to count how many people avoid apprehension, it's difficult to do in the Rio Grande Valley. Its often thick brush has traditionally not had many sensors. The Border Patrol’s most trusted method of counting how many people get away relies on observing tiny human traces: dusty footprints, torn cobwebs, broken twigs, overturned pebbles.

Castanon says the Border Patrol used to have a heavier enforcement presence around the highway checkpoint, but they appear to have been deployed to help with the increasing numbers of families and children crossing the Rio Grande and surrendering to agents to claim asylum. The Border Patrol did not immediately respond to a question on the staffing changes.

“I believe people were taking advantage of that,” Castanon said.

But it's not that simple. Smugglers can leave migrants to walk long distances in this dangerous area, anywhere from 15 to 50 miles (24 to 80 kilometers), with temperatures sometimes reaching above 100 degrees (38 Celsius). Some migrants have been able to make emergency calls to aid groups, which coordinate with local officials or the Border Patrol on rescues.

This month, a woman near Van Horn, Texas, felt she was close to dying because of a lack of water but was able to call an aid group tied to Canales that alerted officials. They were able to trace the coordinates to the call and find her.

“Some don’t even make it. They die of lack of water, food, health, collapse and stay there until somebody stumbles upon their bodies, and that’s when they call us to pick them up,” said Castanon, the deputy.

Canales' aid group and others have worked to build trust with the community of ranchers to get access to some of this land along the path north of the border.

“People have a humanitarian nature in them. They may have very conservative politics, but they don’t want to see people die,” Canales said.

The advocate compared the region full of ranches with the desert in Arizona, where deaths of migrants have long been a problem. Last summer’s record heat and dry weather in Arizona were the main causes behind the 227 deaths counted by a migrant aid group, the highest in a decade.

“We’ve got a large group of volunteers coming in to build more water stations,” Canales said. “We need to figure that out because a lot of people are dying.”