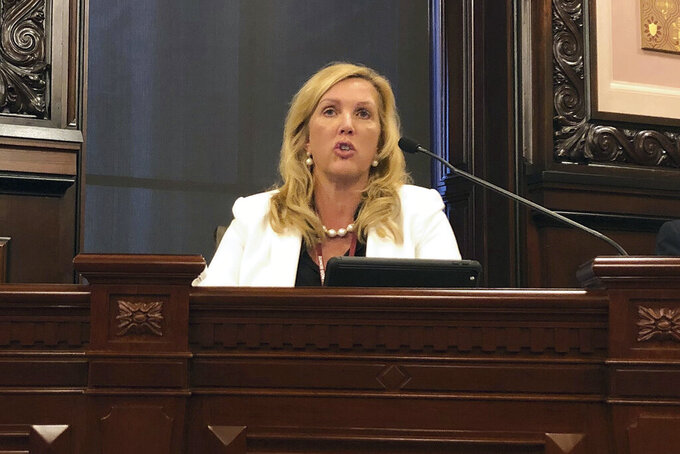 FILE - In this Feb. 6, 2019, file photo, Illinois Sen. Sue Rezin, R-Morris, speaks in Springfield, Ill. More Republican women than ever are seeking House seats this year after the 2018 election further diminished their limited ranks in Congress. But so far it appears that any gains this November could be modest. (AP Photo/John O'Connor, File)

CHICAGO (AP) — More Republican women than ever are seeking House seats this year thanks to a reenergized recruitment effort after their limited ranks in Congress diminished even further in the 2018 election. But any gains in November could be modest.

Many of these roughly 200 candidates are running in safe Democratic districts. In friendlier Republican territory, some have struggled to win primaries and are facing long-standing challenges, including fundraising, that the coronavirus pandemic has exacerbated. That's left some of these women questioning their party's commitment to the effort and warning about longer-term effects.

“If you don’t have a Republican woman running in a winnable seat, it doesn’t really matter,” said Julie Conway, a Republican consultant who leads the Value In Empowering Women PAC, which supports GOP women for federal office.

Some Republicans fear that failing to elect more women will hurt the party as female voters increasingly are supporting Democrats. That shift, particularly in suburban areas, helped Democrats pick up enough seats to win control of the House in 2018, and will be a critical factor as Republicans try to win back the chamber this fall.

National Republican Congressional Committee spokesman Michael McAdams noted that more than half of the party’s 21 “Young Guns” — candidates running in the most competitive districts — are women. They include Genevieve Collins, a Dallas businesswoman who defeated four men in the GOP primary to face Democratic Rep. Colin Allred.

The next test comes Tuesday in states such as Indiana, where Republican Rep. Susan Brooks — one of 13 Republican women in the House — is retiring. With more than a dozen candidates vying for the GOP nomination, there’s no guarantee a woman will win or be able to hold the seat if she does.

Democrats have been eyeing the district, which includes parts of Indianapolis and its fast-growing suburbs, as a potential pickup, due largely to the suburban women who have turned against President Donald Trump and the GOP. The likely Democratic nominee is Christina Hale, a former state lawmaker.

Republican women have always had a tougher time winning office. The party has eschewed identity politics, operating more as a meritocracy that believes the best candidate will rise to the top, said Debbie Walsh, director of the Center for American Women in Politics at Rutgers University.

Voters often perceive women as less conservative than men, and particularly in the South, voters may have more socially conservative views about gender roles, in which politics is more of a man's job, Walsh said.

There's also a significant difference between the two parties in financial support for female candidates. Groups that back GOP women have nowhere near the resources of organizations such as EMILY’s List, which has existed much longer and has been a game changer for Democratic women. The three main PACs focused on electing GOP women have raised about $1.7 million combined for this election cycle as of April 30, compared with more than $48 million by EMILY’s List.

Money has been critical since the coronavirus outbreak, which has made traditional grassroots campaigning such as door knocking nearly impossible and benefited candidates who can afford to run TV and digital advertising.

In Indiana, that's helped elevate Republican state Sen. Victoria Spartz, who has loaned her congressional campaign roughly $700,000. But her lack of campaign experience — she won her seat after a caucus vote to fill the vacancy — and far-right record has some in the party worried that Republicans will lose if she is the nominee.

The Value In Empowering Women PAC is backing state Treasurer Kelly Mitchell for Brooks' seat. Mitchell was the first woman elected county commissioner in her county more than two decades ago, when people questioned whether the then-20-something mother really wanted to spend her days focused on drainage and highway issues. She completed a leadership program for Republican women, and she credits other women in the program with leading her campaign for treasurer.

But Mitchell said she doesn't talk about gender with voters, focusing instead on her experience and education, and she cites what she says is her record of overcoming adversity.

“When they send me to D.C., they will send a fighter," Mitchell said. "I talk about that often.”

Republican Rep. Martha Roby of Alabama is also leaving Congress, and she will be replaced by a man. Businessman Jeff Coleman and former state lawmaker Barry Moore were the top finishers in a March primary and face a runoff. Businesswoman Jessica Taylor narrowly missed qualifying for the runoff.

Republican women appear to have gained one seat in central Illinois, where Mary Miller won the nomination for a safe GOP district where Rep. John Shimkus is retiring. In Iowa, Ashley Hinson and Mariannette Miller-Meeks are in good positions to win GOP primaries, though they would face tough general elections. Hinson is running in the district represented by Democratic Rep. Abby Finkenauer, who is seeking a second term, and Miller-Meeks is seeking a seat vacated by Democratic Rep. Dave Loebsack.

Among difficult losses for GOP women, Illinois state Sen. Sue Rezin lost a tight congressional primary in a Chicago-area district that Republicans held for decades before Democratic Rep. Lauren Underwood flipped it in 2018.

Rezin has won four elections — three of them top-tier state races — and was the opponent Democrats feared most in a general election. But she struggled to compete in fundraising and lost to state Sen. Jim Oberweis, who loaned his campaign $1 million.

Rezin said the pandemic was a factor. She modeled her campaign on turnout of around 80,000 but only about 35,000 voted in the March 17 primary. In the weeks leading up to the election, people were scared to even open their doors for fear of spread of the coronavirus, her team said.

But the overriding issue, Rezin said, is that for all the GOP chatter about supporting women, the party hasn't gotten serious about committing to helping women win.

“The days of checking the box are over," she said. "If our party continues to just check the box for women, we lose and Democrats win.”