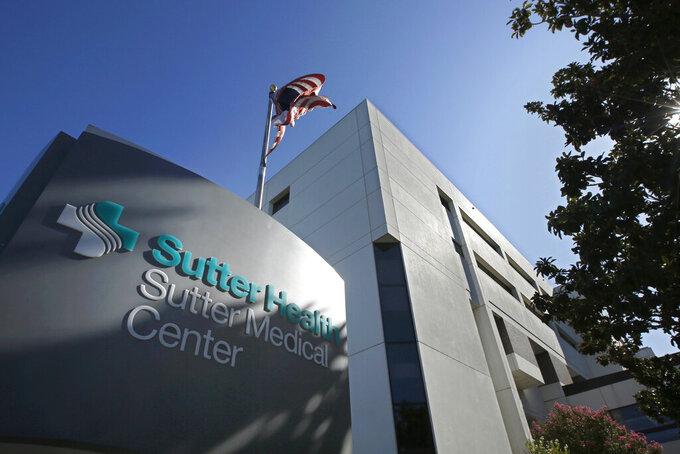 FILE - In this Sept. 20, 2019, file photo, an American flag flutters in the breeze outside of the Sutter Medical Center in Sacramento, Calif. California's attorney general wants the power to block hospital mergers that he says would limit competition and drive up prices, setting up a fight in the state Legislature next week over the future of health care delivery in the nation's most populous state. Becerra has made health care costs a focus of his first term in office. Last year, Becerra settled an antitrust case against Sutter Health, one of the country's largest health systems for $575 million and a pledge from the system to halt some of its anticompetitive practices. (AP Photo/Rich Pedroncelli, File)

SACRAMENTO, Calif. (AP) — Attorney General Xavier Becerra wants the power to block hospital mergers that he says would limit competition and drive up prices, setting up a fight in the state Legislature this week over the future of health care delivery in the nation's most populous state.

Becerra can already block or modify the sale of nonprofit hospitals in California. But a bill set for a vote would let him review most health facility transactions before they happen, giving him final say on things like whether two for-profit hospitals can merge or whether a nonprofit hospital can acquire a doctors' office.

“These hospitals, even practices by physicians and so forth, are being sold like commodities,” Becerra said. “That’s why it’s become important more and more to oversee this concentration of providers in the hands of fewer and fewer owners.”

Hospitals are fighting the legislation, arguing it would stunt the growth of health systems that the state relies on because they can quickly share resources and staffing, particularly during a pandemic.

“This is a world in which health care can largely only be provided through partnership,” said Carmela Coyle, president and CEO of the California Hospital Association.

It's one of hundreds of bills the Legislature will consider during the final week of a coronavirus-shortened session as lawmakers rush to finish their work by an Aug. 31 deadline while adhering to public health guidelines beneath the smoke-filled skies from dozens of wildfires burning throughout the state.

Hospitals across the country have been merging at a fast pace, creating extensive health care systems that cover large areas. Those health systems have begun buying up doctors' offices, specialist practices and surgical centers. They find it more efficient — and more profitable — to have their hands in health care at all levels.

The trend has been most pronounced in California with its more than 400 hospitals, the most of any state. The proportion of hospitals that were part of health systems jumped from 39% in 1996 to 60% in 2016. Meanwhile the percentage of doctors working for practices associated with health systems increased from 24% in 2010 to 42% in 2018.

Companies owned by private equity firms have joined the spending spree, buying up physician practices and contracting with hospitals — a practice that has accelerated during the coronavirus pandemic as health care providers have struggled to survive while their patients stay home.

Those mergers have increased costs, with prices at hospitals in health systems rising faster than independent hospitals, according to a study led by Glenn Melnick, a health policy professor at the the University of Southern California's Sol Price School of Public Policy.

“I like the concept of having some oversight,” Melnick said of the legislation. “The challenge will be to write implementing regulations that don’t make normal market transactions so difficult as to impede an effective market.”

Health care costs have become a bigger issue in Northern California, where studies have shown prices are consistently higher. The California Hospital Association blames this on the region's higher cost of living, particularly in and around the San Francisco Bay, and the presence of strong labor unions.

Consumer advocates blame the price discrepancy on a lack of competition. Last year, Sutter Health — one of the largest health systems in the country — settled an antitrust lawsuit for $575 million and an agreement to halt some of its anti-competitive practices. The settlement has not yet been finalized by a judge.

Instead of bringing lawsuits after the fact, when mergers and price increases have been in place for years, Becerra said he wants the power to stop the mergers before they happen. The bill would let him do that, with some exceptions. It would only apply to transactions of $500,000 or more and sales involving a private equity group, a hedge fund or a health care system made up of at least three hospitals.

MemorialCare, a health system in Orange and Los Angeles counties, owns four hospitals. But the system has amassed more than 200 ambulatory sites, which perform a variety of services cheaper than a hospital can. CEO Barry Arbuckle said this bill could have prevented many of those transactions, and he worries it will stop health systems from doing the same.

“What health systems need to do (is) expand with these multiple community-based locations,” he said. “People can receive care closer to home at a more affordable price.”

State Sen. Bill Monning, a Democrat from Carmel and the author of the bill, said the legislation is not designed to block acquisitions and transactions, but “make sure all Californians are protected and that markets stay competitive.”

“We want there to be a fair transaction, not an out-of-state hedge fund that's seeing an opportunity to acquire an asset without any accountability to the patient population,” he said.