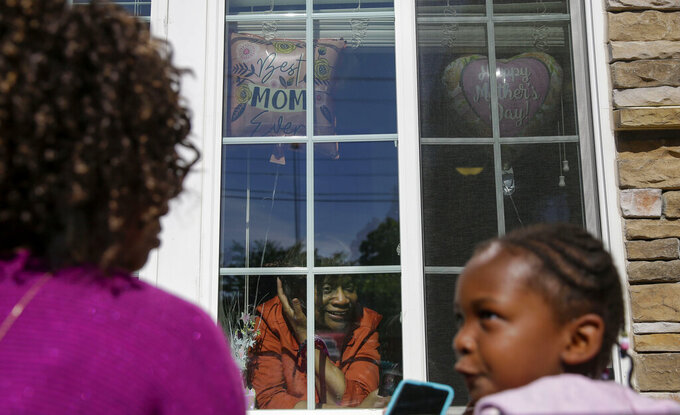 Mary Washington, 73, speaks through a window to her daughter, Courtney Crosby and grandchild Sydney Crosby for a Mother's Day celebration at Provident Village at Creekside senior living on Sunday, May 10, 2020, in Smyrna, Ga. (AP Photo/Brynn Anderson)

The state has now passed 33,500 confirmed cases of the coronavirus and has had at least 1,405 confirmed deaths from the resulting COVID-19 respiratory illness, according to figures published Sunday by the state Department of Public Health.

This was the first weekend that people could set up tents, chairs and umbrellas on beaches, and some on Tybee Island were eager to take advantage of the new freedoms.

“It seems like a lot of people are kind of excited to finally get out and get some sun,” said beachgoer Riley Monaghan told WTOC-TV. “It’s been hard the last few weeks. Be cautious still. Still try to remain a good distance, keep the distance. That’s still important.”

Most beach access points and parking lots on Tybee Island were open, although a section of the pier remained closed.

Beginning Monday, visitors can return to trails and some parking areas at Chattahoochee River National Recreation Area in metro Atlanta and the Kennesaw Mountain National Battlefield. Visitor centers and restrooms remain closed. On Thursday, the Chattahoochee and Oconee National Forests in northern and central Georgia reopened some trails and dispersed recreation areas, although the Appalachian Trail and its access points remain closed. Cumberland Island National Seashore allowed people to return to beaches by private boat beginning May 2.

Some continue to express unease with decreases in restrictions, with Atlanta Mayor Keisha Lance Bottoms on Sunday telling CNN that “we will see over the next couple of weeks what this massive health experiment, what the results are in our state.”

Bottoms said the offices of many large corporations remain closed, but that others are being forced to go back to work to retain their jobs and health insurance. She expressed concern over “erratic leadership from the White House” saying the approach needs to be more thoughtful.

“I don’t think the way to reopen up Georgia and stimulate the economy is to send the people out who can least afford to get sick,” she said.

Consequences of lower tax revenues from a wounded economy continue to play out in state government, where agencies have been instructed to propose a 14% cut in state spending for the budget year beginning July 1.

For example, the University of North Georgia on Friday emailed its employees to say that it's looking to save $2.2 million by furloughing employees without pay. That's part of a plan across the 26-college system to plan for budgets next year. Regents last week voted for a proposed plan to furlough employees between four and 16 days, with lower-paid workers required to take less time off. Chancellor Steve Wrigley and the presidents of the colleges would be furloughed for 26 days, equal to a 10% pay cut.

Regents say any layoffs or furloughs would be approved in June after lawmakers agree on a budget.

University of North Georgia President Bonita Jacobs, in the email obtained by The Times of Gainesville, wrote that the university is seeking to save nearly $10 million through other routes besides furloughs. She wrote that layoffs would be “a last resort.”