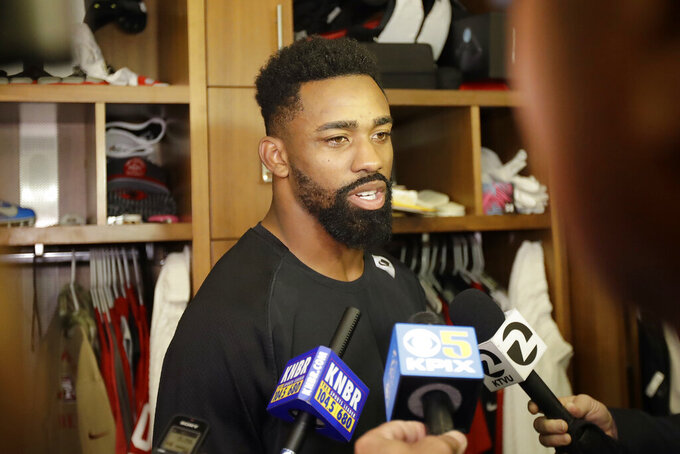 FILE - In this Wednesday, Feb. 5, 2020, file photo, San Francisco 49ers' Raheem Mostert speaks to reporters at the team's NFL football training facility in Santa Clara, Calif. Long before the sports world had been shut down and when only one death from the coronavirus had been reported in California, Mostert was concerned enough about the pandemic to cancel an appearance at an autograph show in early March. (AP Photo/Jeff Chiu, File)

Long before the sports world had been shut down and when only one death from the coronavirus had been reported in California, San Francisco 49ers running back Raheem Mostert was concerned enough about the pandemic to cancel an appearance at an autograph show in early March.

Now more than two months later after more than 90,000 deaths in the United States, including more than 3,000 in California, that worry is still present for Mostert and his wife, Devon, who is expecting the couple’s second child this fall.

“She has actually cried a couple of times just because she wants to make sure not only myself but those 90 guys that are in the locker room are going to all be safe, and their families as well,” Mostert said Wednesday from his home in Cleveland.

Mostert’s decision back on March 4 to cancel his appearance at the Santa Clara County Convention Center a few days later for an autograph that also was expected to include luminaries like Joe Montana, Klay Thompson and Patrick Willis was noteworthy because there had been almost no disruption at that time in sports in this country.

That all changed the following week when the NBA and other leagues shut down. Mostert has remained home in Ohio ever since and is preparing for the upcoming NFL season through virtual meetings.

But he knows that eventually he will return to California and begin practice with his teammates on the field. California Governor Gavin Newsom said this week that if progress continues at the current pace that sports could return to the state without fans as early as next month.

NFL training camp is scheduled to begin in late July and Mostert and his family know that he will take part when that happens.

“She understands that no matter what, this is my job and I have to do what my job requires me to do, which is all fair,” he said. “She’s excited as well. She wants football to be back and sports, to be back in general. ... We don’t know what it’s going to take for us to be out back out there on the field, testing every week and playing in a different state or what have you. We don’t know yet. That’s something that’s going to be determined once the time comes.”

When that happens, Mostert will look to build on last year’s breakthrough season. After being cut by six teams and carrying the ball only eight times his first three seasons in the NFL, Mostert was a key part of San Francisco’s NFC title winning season in his fifth year in 2019.

He led the 49ers in rushing this season with 772 yards and provided the signature performance of his career on the big stage of the NFC championship game when he ran for 220 yards and four touchdowns in a 37-20 win over Green Bay that sent the Niners to the Super Bowl.

Only Hall of Famer Eric Dickerson has rushed for more yards in a playoff game with 248 for the Rams against Dallas on Jan. 4, 1986.

Despite all that success, Mostert still has never started a game in the NFL as he has been mostly a part-time player who’s only game with at least 20 carries came against the Packers in the playoffs.

He’s preparing for a heavier load if needed this season by bulking up.

“I’m actually gaining some more muscle, which was kind of bizarre just because I haven’t really been able to think about gaining muscle because I’ve already had muscle like that,” he said. “But I’m just trying to incorporate those things in my daily workouts. So I’m able to you know take those hits and be one of those guys that are getting 200 carries. I have to get prepared for that. The only way I know how is to get bulky and stronger.”

Mostert is also looking to become a more versatile player this season on offense. The former college receiver at Purdue has not made a big impact in the passing game as a pro.

He has just 20 catches for 205 yards in his career but hopes to contribute more in that aspect in 2020.

“I don’t want to be just one-dimensional,” he said. “I want to be multi-dimensional and being able to catch the ball out of the backfield is one of the things that I really pride myself on. Even lining up in the slot position. There’s multiple things I’ve been trying to work on. I’m just trying to get back to you know my wide receiver days when I was playing receiver in college. Just getting back used to everything and doing everything.”