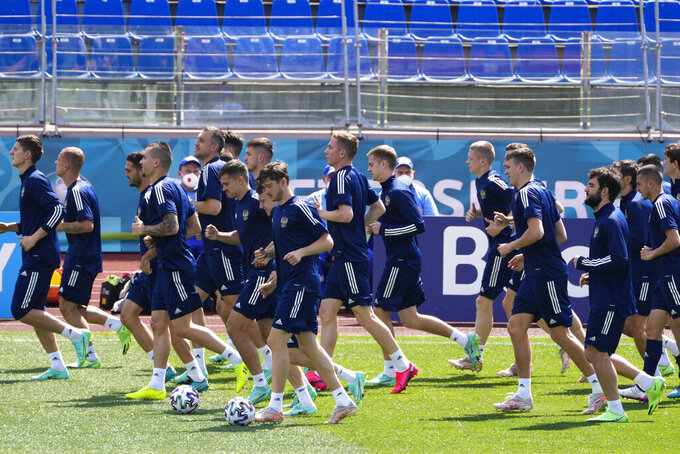 Russia players warm up during a training session of the national team at Petrovsky stadium in St. Petersburg, Russia, Friday, June 11, 2021, on the eve of the Euro 2020 soccer championship group B match between Russia and Belgium. The Euro 2020 gets underway on Friday June 11 and is being played in 11 host cities across 11 countries. The event was delayed by one year after being postponed in 2020 due to the COVID-19 pandemic. (AP Photo/Dmitri Lovetsky)

MOSCOW (AP) — Russia winger Andrey Mostovoy was cut from the national team for this year’s European Championship on Friday after testing positive for the coronavirus.

Mostovoy is the first player to be cut from a team at the tournament because of the virus.

The team wrote on Twitter that Mostovoy has been replaced by defender Roman Evgeniev “in connection with an unfavorable result of PCR testing.”

Russia coach Stanislav Cherchesov said no other players were suspected to be infected.

“We all did (testing) yesterday evening, and all did it again this morning. Everyone is clean,” he said.

Russia is scheduled to play its opening Euro 2020 match against Belgium on Saturday in St. Petersburg.

Mostovoy made his debut for Russia last year and played eight of the team’s last 11 games, mostly as a substitute.

Evgeniev’s only appearance for his country was in a 5-0 loss to Serbia last year. He had been with the team at a training camp in the run-up to the tournament.