Move over St. Paul: Napoli stadium to be named for Maradona 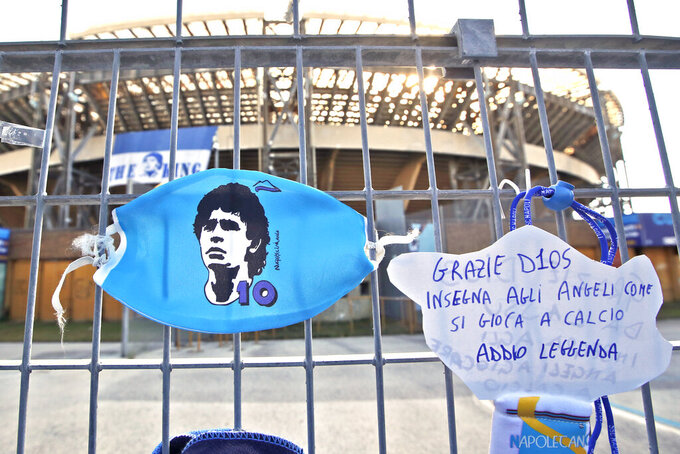 A sign with writing reading in Italian "Thank you god, teach the angels how to play soccer, farewell legend" is seen next to a face mask showing an icon of soccer legend Diego Maradona on the gates of the San Paolo stadium, in Naples, southern Italy, Thursday, Nov. 26, 2020. Maradona died Wednesday, Nov. 25, 2020 in Buenos Aires. (AP Photo/Alessandra Tarantino)

Move over St. Paul and make way for Maradona.

The mayor of Naples started a formal process to rename the San Paolo stadium for Diego Maradona on Thursday.

The move comes with the city in mourning for the soccer great, who died Wednesday of a heart attack at age 60, two weeks after being released from a hospital in Buenos Aires following brain surgery.

“We are already putting it together this morning, taking the first steps to dedicate Naples’ stadium to Maradona,” Luigi De Magistris said. “It’s a process but it will be a quick process, because when there is such a strong desire there’s nothing that will hold us up.

“We’re hoping to make it coincide with the resumption of games with fans,” the mayor added.

The city operates the San Paolo stadium, where Maradona led Napoli to its only two Serie A titles in 1987 and 1990.

Built after World War II, the stadium was named for St. Paul according to the legend that the apostle docked in the surrounding Fuorigrotta area when he reached current-day Italy.

“I think it’s fair to name San Paolo after you, to have you still with us as a witness to the sublime path that this squad has undertaken,” Napoli president Aurelio De Laurentiis said in an open letter to Maradona. “Yours were unforgettable years in Neapolitans’ memories. A symbol of a renewal and a desired resurrection.”

Napoli plays Croatian side Rijeka on Thursday in the Europa League in a match that will be empty of fans due to the coronavirus pandemic.

However, fans were already outside the stadium late Wednesday and into Thursday morning waving banners, singing songs and lighting flares in Maradona’s honor -- even though gatherings are technically banned in the city, which is located in a coronavirus “red zone.”

“Maradona is like a father, like a brother, a family member for us,” said one fan outside the stadium, Raffaele Cuomo. “Unfortunately it’s like someone from the family died, and it’s like a part of Naples has died.”

Added Anna Carpi, another Naples resident: “It broke my heart. … But Diego will always be with us, in our heart.”

When Maradona joined Napoli in 1984, the southern club had won virtually nothing and was far removed both geographically and socio-economically from the country’s soccer capitals of Milan and Turin.

“It sparked the revival of a people,” De Magistris said. “He loved Naples and so he wanted to — via soccer — make the world aware of a city full of humanity, affection, energy and fantasy.

“Even today I see young kids who didn’t (see him play), like my kids, who still have Maradona in their minds and in their hearts."

Ottavio Bianchi, who coached Maradona and Napoli to their first Italian league title in 1987, lamented that he didn’t do enough to stop Maradona’s cocaine addiction.

“Diego was great at doing simple things,” Bianchi told RAI state radio. “He made himself very available to kids and his teammates. But I regret that I in no way prevented the path that his life took.

“When we were alone I tried to scold him and he listened to me with his eyes facing downward. I remember that I told him that he was putting his life at risk. He looked at me and told me that he wanted to live his life with the gas pedal pushed completely down -- to the maximum.

“It upsets me that he has gone like this,” Bianchi added. “I always hoped that he would be able to dribble by one final obstacle.”