Much of Europe tightens anti-pandemic rules as virus surges 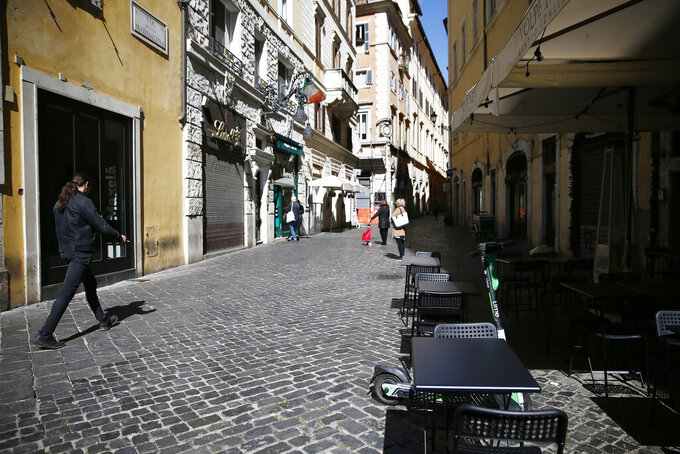 People walk in an empty street in downtown Rome, Monday, March 15, 2021. Half of Italy's regions have gone into the strictest form of lockdown in a bid to curb the latest spike in coronavirus infections that have brought COVID-19 hospital admissions beyond manageable thresholds. (Cecilia Fabiano/LaPresse via AP) 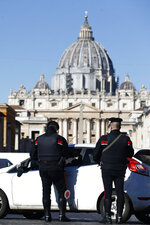 ROME (AP) — Tighter restrictions aimed at reining in surging coronavirus infections took hold in much of Italy and parts of Poland on Monday, while in France, Paris risks being slapped with a weekend lockdown as ICUs near saturation with COVID-19 patients.

In line with an Italian government decision late last week, 80% of schoolchildren, from nursery through high schools, were locked out of classroom starting on Monday. Ever-mounting numbers of ICU beds occupied by COVID-19 patients, steadily rising daily caseloads and infection transmission predominantly driven by a virus variant first discovered in Britain have combined to make Italian Premier Mario Draghi's new government apply “red zone” designation on more regions, including, for the first time since the color-tiered system was created last fall, on Lazio, the region including Rome.

In red-zone regions, restaurants and cafes can do only takeout or delivery, nonessential shops are shuttered and residents must stick close to home, except for work, health or shopping for necessities. Over the weekend, many hair salons extended hours to handle last-minute customers, and crowds thronged shopping streets, parks and seaside promenades before the crackdown took effect.

On Monday, reality sunk in.

In a country, where coffee is taken, properly, at a cafe counter or table, and not in some take-out paper cup, Alessandra Lorisa took off her mask and sipped hers in a Rome piazza. “By now, it's become part of our routine,'' she said. ”It's a lot more American, if we can say so,'' she added, expressing hope that after Easter “we can see some improvements, to get back to the routines that we were used to.”

Draghi on Friday promised an quick infusion of pandemic aid to shuttered businesses.

Beyond the commercial aspects, parents voiced concern for children shut out of classrooms. "They have little interaction now with their friends, they have to celebrate their birthdays alone,'' said Marco Pacciani as he strolled through a Rome park with his young son.

In Poland, amid a sharp spike in the number of new infections and of hospitalized COVID-19 patients, restrictions were tightened in two more regions, including the capital, Warsaw, and a western province that borders Germany. Two other provinces were already under restrictions.

Under the heightened measures, hotels and shopping malls have to remain closed, as do theaters, cinemas, fitness clubs and sports facilities. Schoolchildren ages 6-9 will have a combination of in-class and remote instruction.

An inexorable climb in the numbers of patients being treated in French hospital ICUs, particularly in the Paris region, is increasing pressure on the government of President Emmanuel Macron. As is the case elsewhere in Europe, virus variants are suspected of fueling increases in serious cases in France. Macron’s government has been trying to stave off another punishing nationwide lockdown in 2021, instead opting for a 6 p.m. to 6 a.m. nationwide curfew.

Expected to be decided in a few days is whether the Paris region and its 12 million inhabitants will be locked down on weekends.

Last week, countries in the Western Balkans announced a tightening of measures amid a surge in cases in Serbia, Bosnia and Montenegro.

As they received first vaccines on Wednesday, doctors in Bosnia’s capital, Sarajevo, warned that the virus has exploded in the past several days. Bars, restaurants and nonessential shops in the Sarajevo canton will be shut for the upcoming weekend.

In Serbia, Prime Minister Ana Brnabic criticized the holding in past days of two concerts by a popular band at a Belgrade hall. The country of 7 million has vaccinated more than 1.5 million people, which is among the highest rates in Europe.

On the western edge of the continent, Portugal stood out as an outlier. It was emerging Monday from a two-month pandemic lockdown, with the country gradually reopening over the next seven weeks, barring setbacks.

Primary and nursery schools, hair salons and bookshops were among the places reopening Monday. Prime Minister António Costa said in a tweet Monday that the process must be “very prudent, gradual and piecemeal.”

AP reporters across Europe contributed to this report.