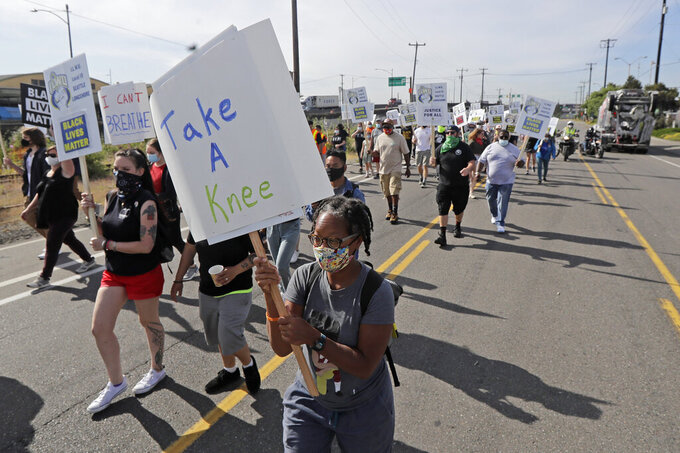 Union workers and other supporters march Friday, June 19, 2020, near the Port of Seattle as part of a coordinated eight-hour work stoppage at more than two dozen West Coast Ports that was organized by the International Longshore and Warehouse Union. Workers took part in rallies honoring Juneteenth and to protest against police violence and racism. (AP Photo/Ted S. Warren)

SEATTLE (AP) — Thousands of people were gathering at a rally and march Friday in Seattle’s Central District, one of several events around the city and region to celebrate Juneteenth.

Speakers in the early afternoon included relatives of people who have been killed by police in recent years. Marchers will pass significant African-American landmarks in the Central District.

“My son had dreams and goals, he loved rapping part-time, but was a full-time fork lift driver," Stephanie Butts said about 19-year-old Damarius Butts, who Seattle police shot and killed in 2017.

Police have said he stole doughnuts, beer and other items from a 7-Eleven store and then brandished a weapon at a clerk. Police soon after chased him on foot into a building where Officer Elizabeth Kennedy said he pulled a gun and she felt something hit her ballistic vest before she started firing at him.

Butts said in the years since she's been back and forth to court and that police audio doesn't match what police have said happened.

“Police somehow think it's OK to kill and no punishment for it," Butts told the crowd. "No officer has been charged here in 30 years? That is crazy as hell to me. I'm proud of the changes that have been made so far and I pray more change is coming.”

The Northwest African American Museum in Seattle is also working with five Black museums throughout the United States to create a virtual Juneteenth celebration.

LaNesha DeBardelaben, the museum’s executive director, said she and her team wanted to make sure the coronavirus closures didn’t prevent people from celebrating the day. The museum is also supporting a Juneteenth march in the neighborhood.

The Juneteenth celebrations come as protests over police brutality and racial injustice have happened almost daily following George Floyd’s death in May after a Minneapolis police officer held his knee on Floyd’s neck for nearly 8 minutes.

Juneteenth commemorates June 19, 1865, when the Union army brought word of the Emancipation Proclamation to enslaved people in Texas. It is celebrated as the end of slavery in the United States.

Another rally featuring speakers like Seattle Mayor Jenny Durkan and U.S. Rep. Pramila Jayapal is scheduled for Friday afternoon in the city.

Union workers and other supporters marched Friday morning near the Port of Seattle as part of a coordinated eight-hour work stoppage at more than two dozen West Coast Ports to honor Juneteenth and protest against police violence and racism. It was organized by the International Longshore and Warehouse Union.